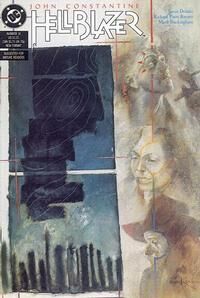 Hmm. I don't know if I'll get the hang of this survivalist business. I mean, what about washing -- and where's the toilet?

Appearing in "The Fear Machine, Part I: Touching the Earth"Edit

Synopsis for "The Fear Machine, Part I: Touching the Earth"Edit

John Constantine wakes from a nightmare next to a young woman named July whom he met the night before. Awkwardly, he slips out of bed and gets dressed. On the way out, he meets the milkman, who begins chatting with him casually, which tips John off to the fact that he's stuck around too long. Later, while buying a pack of silk cuts, John catches sight of a newspaper with his own face plastered on the front page under the headline "FACE OF EVIL: Satanic Slayer Sought".

After hitchhiking for a while, John tires of the trucker's conversation, and decides to walk until something better comes along. He walks for nearly an hour before anyone stops, and the first car that does turns out to be a police car. When John realizes this, he runs into the woods, and ends up falling down an escarpment and into a stream. After some time, the police give up searching, and John shakily rises to his feet.

John strips down, trying to dry out, but he is suddenly started by a teenage girl staring at him with his kit off. She comments that she likes the tattoo of a tree on his bottom. He doesn't know of any tattoo, and brushes it off, quickly dressing with fresh clothes from his suitcase. She claims that she knows he's a decent man, and invites him to come eat with her friend Marj. She has collected a bag full of magic mushrooms, which are for her friend Eddy. She introduces herself as Mercury and leads him on the way.

Marj is welcoming, trusting Mercury's instinct that John is a good man. Marj, Merc, and Eddy had been with the Peace Convoy until 1985, when the police had smashed their trailers and beat them with truncheons at the Battle of the Beanfield. Now they travel in smaller groups, hoping to avoid attention. Soon Eddy returns, and after a meal, they hit the road.

John agrees to travel with the nomads, and eventually, they arrive at a special camp called a park-up. Sympathetic landowners - usually farmers - allow the travellers to camp on their land in exchange for free manual labour. John remembers that the last time he had been t oa place like this, he had been holed up in a communal flat in Brixton, and he had soon grown to hate all the people he lived with. Mercury's speaking for him helps John to feel more comfortable in this new age crowd, though.

Marj and Merc help John to build his own tepee, warning that he should dig a drainage gully, should it rain, otherwise he will be flooded out. After getting settled in, John is visited by a man named Errol, who has a propensity to refer to good things as "the bollocks." Errol is happy to have found the convoy, because he might have died in London, with its drugs and its pushers. This is the only real family he's ever had.

John encounters many of the other travellers, but feels awkward about making conversation. Marj teases him about his tendency to make a joke when he's embarrassed about things, and Merc suggests that he not try so hard - he should just be himself.

That night, John listens to the many travellers talking, and begins to get to know them all better. Eddy seems to be the de facto leader of a group who are heavily into earth-magic. As each of the travellers starts to become more of a real person rather than a stereotype, John feels the need to isolate himself. John excuses himself, as someone shows Eddy the newspaper with John's face on it. Despite the allegations against their visitor, Eddy seems not to be worried, because Mercury approves.

As John retires to sleep, he suddenly feels very small in comparison to the earth. Hours later, he wakes to the deafening sound of rain, and realizes too late that he forgot to dig a drainage gully.

Retrieved from "https://heykidscomics.fandom.com/wiki/Hellblazer_Vol_1_14?oldid=1433520"
Community content is available under CC-BY-SA unless otherwise noted.