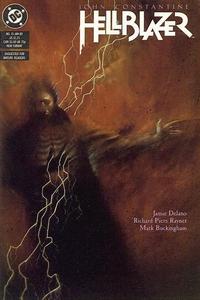 Feel it. That unmistakable thrill of excitement, crackling from groin to pineal gland -- signalling that here is danger, here are dark doings. Ignore it, John. You don't do that kind of shit anymore. You're starting to fit in here -- and it could do you some good. Don't blow it for the sake of a bad day.

After some time spent with the nomadic remnants of the Peace Convoy, John Constantine is starting to get used to their lifestyle, but there's always something that comes along and ruins all good things.

As he wanders through the woods, John spies a woman named Myra, who he has noticed noticing him recently. She prepares to bathe in the nearby stream, and John has to remind himself not to let his more animal urges get the better of him. Instead, he clears his throat and says a good morning. She seems nervous, but John is sure she's interested in him. However, she soon reveals that she knows about the claims in the paper that he is a satanic killer. She accuses him of being a black magician who plans to steal her friend Eddy's power.

John tries to tell the girl that the paper is full of lies, which is apparently what Eddy had said when she showed it to him. She is obviously panicked and freaking out, though, so John acts instinctively. He hypnotizes her into forgetting the paper and thinking better of him. However, it doesn't go quite as planned, and she realizes that he was trying to mess with her head. Even so, she leaves, and John is left thinking that he doesn't want anything to ruin his chance at a good life with these people. Unfortunately, he's beginning to understand that he is the most likely thing to ruin it.

John is surprised by the appearance of Mercury, who decides to take him for a walk along one of the ley lines, in order to bring their spirits up with positively charged energies. She comments that Myra looked to be in bad shape that morning, and smiling, she adds that she won't tell anyone what he did. She challenges him to a race to the next stone circle, but when he finally catches up to her, she seems to have been overcome with bad feeling.

The stone circle has been fenced in with 'keep out' signs. Mercury claims that the stones are giving off a feeling of fear, because the fence is closing them off from the ley lines. Without any hesitation, the girl climbs over the fence and rushes to ward the stones. The security guard ignores John and tries to stop the girl. When the guard becomes rough, John hops the fence and brandishes a stick, warning that he'll do his level best to kill the man if he lays a hand on her. Soon, the supervisors of the Geotronik site where they stand come out to see what the commotion is. John notes that Mercury can't seem to take her eyes off the pasty man. The issue is resolved without violence or police involvement, and John and Mercury are allowed to leave.

As they walk away, Mercury comments that though she is fine now she sensed some evil there - especially in the pasty man. John tries to ignore his own internal thrill at the idea of delving into danger and wrestling with evil as they run back to the camp. There, John decides to apologize to Myra for their meeting that morning. She accepts, and offers him some tea, which he drinks gladly.

Later, John visits Errol at his van, where the man is putting up a series of cave-painting like drawings. One in particularly catches John's eye. It was drawn by someone else. Errol explains that a woman who stopped by on her way to Scotland had drawn it, and that her name had been Zed. At the idea that Zed might still be alive, John suddenly becomes overcome by paranoia, and it soon becomes clear that he is under the influence of some kind of psychedelic.

Eddy and his companions come to help, and Myra admits that she dosed his tea with fly agaric mushrooms. John recognizes the name, and realizes that he has been poisoned. Not only is fly agaric highly toxic, it also has comparatively severe side-effects. Rather than accept Eddy's offers of downers, John runs off into the forest.

After several hours of tripping on the toxins in the mushrooms, John stabilizes enough to realize that night has fallen and that he is in one of the stone circles along the ley lines. There is someone else there, using some kind of electronic device attached to the stones. Before long, though, the toxins kick in again, and the world goes topsy-turvy as the man begins shouting in an unrecognizable language. The inability of either man to keep his balance suggests that it is more than the mushrooms having an effect, and eventually the man stumbles and cracks his head hard against one of the stones.

Hours later, John comes to, and finds no evidence of the man he had seen earlier. He wonders if the fear he felt on his trip was amplified by the ley lines, just as Mercury had sensed the stones' fear earlier. He stumbles back to the camp where Marj takes him in. There, she explains that Mercury's father Pete was a drug dealer, and not altogether very bright. John falls asleep as Marj is talking.

Later, John wakes to find Marj lying beside him, and impulsively, they have sex. Both are pleased with the decision, though John is wary of feeling too close to a woman after what happened to Zed. Eventually, Mercury pops up to reveal that she had been listening to the whole affair, before John grumpily tells her to go back to sleep.

John senses that there is something important and valuable at the camp which has brought him there, and when Mercury comments that she liked it when he referred to her as his daughter earlier, he realizes that what he likes about the place is the sense of family. As they settle back to sleep, the police begin to surround the campsite.

Retrieved from "https://heykidscomics.fandom.com/wiki/Hellblazer_Vol_1_15?oldid=1433521"
Community content is available under CC-BY-SA unless otherwise noted.