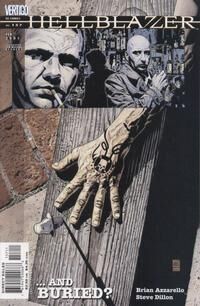 Constantine meets a man he calls Turro in a bar. Turro wants him to do a job for him. Meanwhile, at a table behind the bar three guys are talking about a man photographed with a tattoo on his hand recently in Sierra Leone who they were sure they had murdered some time back. At the end of the story, as Constantine and Turro are leaving the bar, the man with the tattoo on his hand walks past them into the bar.

Retrieved from "https://heykidscomics.fandom.com/wiki/Hellblazer_Vol_1_157?oldid=1433664"
Community content is available under CC-BY-SA unless otherwise noted.