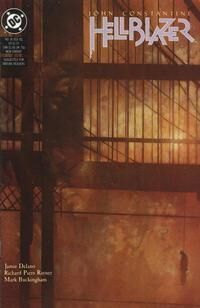 I wonder where I got the idea that it was peaceful in the countryside. It's a bloody war-zone. Slowly but surely, everything's slipping into bad craziness again.

Mercury dreams of a pale man, who is forced to put a rope around his neck, and then leap from the top of a tall suspended bridge. The man never reaches the end of his fall, though, and over and over again, the jump plays out in Mercury's mind. Waking, she recalls how she had nearly lost the recurring dream when her mother Marj and John Constantine had cuddled. But her mother had become cross when she had said that she liked John too. Coveting the closeness her mother had shared with him, Mercury begins trying to crawl into bed with them.

Suddenly, a police squad smashes through the window and forces its way into the motor home, forcing John and Marj into wakefulness. They drag the three inhabitants out into the daylight, handling them roughly, and not giving Marj a chance to even dress. The police declare the land the commune is camping on private, and proceed to check for drugs and weapons. From elsewhere, the pale man orders that Mercury be brought to him, and Marj and the girl are packed into the back of a truck. John wants to help them, but the angrier he gets, the more the police beat him.

In the back of the truck, Mercury begins sensing the intentions of the guards in there with them. They both have untoward thoughts about Marj, given that she is wearing only a sheet. With the knowledge that they want to rape her, Mercury cries out, and it causes a scuffle. Fortunately, the truck stops and the pale man opens the door. He injects Marj with something that makes her strangely acquiescent, and she simply waves as Mercury is taken away.

John wakes at Sam and Jo's trailer, where they inform him that despite his attacks against the police, only Marj and Mercury were arrested - though they have been warned to be gone within twelve hours. They give him some clothes, and he returns to the central campsite. In speaking with Eddy, John becomes suspicious about who was behind the raid, and decides to investigate at the nearest town.

Once there, John hears a gunshot, and decides to look into it. Apparently, the night before, a storm frightened a pair of local cows. The vicar had been chasing them down, but eventually one of the cows wound up in the house, and the other went into the greenhouse. In the latter, the vicar's sister Flora was trampled to death. The vicar went mad, and has since been taken to the police station.

As it happens, the police station is where John is going, and he poses as a member of the fictional Citizens Legal Defense Group to look in on the pair arrested during the raid. The man at the front desk explains that there have been no women brought in from the raid, but they did find one woman wandering the streets wearing only a blanket. It's Marj, but her despondency makes John more suspicious. He endeavours to get her out of there, but not without noticing that the security guard from the Geotronik site has come in to see a man named Beale. That's two names to look into now, including Davis from the day before.

After returning to the camp with Marj, John decides to check in with Eddy at the sweat-lodge. Eddy confirms John's own suspicion that the police who conducted the raid were special forces, and they had come specifically for Mercury. Eddy explains that after Mercury told him about what happened on the ley lines yesterday with the Geotronik site, he had investigated, and found that the positive charge there had been turned somehow into a black stream of negative energy. Additionally, the Geotronik site had been dismantled without a trace.

The group gathers and decides to go to Scotland and join forces with an ego-guerrilla group called Pagan Nation while they figure out what's going on. Marj is skeptical, warning that while they can try all they want to fight the police, the real problem is that Mercury has been kidnapped, and she wonders if any of them will use their 'magic' to bring her back. John appears behind her, dressed in dark clothes and with a haircut and shave. He will save Mercury, one way or another. As he prepares to leave, Sam offers him a place to stay in London, should he need it.

Marj drives John to the train station, and he promises that he will find Mercury. As he buys his ticket, he realizes that at last he has chosen a side in this new war. But fighting for peace and freedom seems like a long shot, after all.

Elsewhere, Mercury dreams of hearing sobbing, but finds herself unable to move. She wakes suddenly, and the sobbing sound stops. She decides to wash her face, but the reflection in the mirror is of a man, and she is sure he is the one she heard sobbing. The man in the reflection takes a pair of scissors and thrusts them into his eyes, filling the room with blood, and Mercury collapses. The pale man appears to comfort her, but she struggles away from him, warning that she knows what happens to him. She shows him her vision of him being hung until his head disconnects entirely from his body.

Afterwards, the pale man is plagued by the images. The man, whose name is Fulton, believes that Mercury is powerful enough to justify the effort they took in securing her. Meanwhile, Mercury worries after her mother, but she knows John will look after her.

Retrieved from "https://heykidscomics.fandom.com/wiki/Hellblazer_Vol_1_16?oldid=1433522"
Community content is available under CC-BY-SA unless otherwise noted.