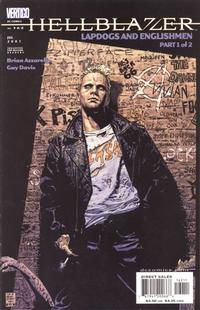 Les, did I do something awful today? Y'know, like push a cripple down a flight of stairs 'er poison some poor dog?

Appearing in "Lapdogs and Englishmen (Part I of II)"Edit

Synopsis for "Lapdogs and Englishmen (Part I of II)"Edit

John gets off a Greyhound bus at the Montana welcoming station. He lights up a cigarette, but a testy security guard makes him put it out. Walking away, John notices a wall filled with flyers, posters and graffiti. One particularly maligned flyer sparks a memory of an event that took place in 1978.

Flashback:
John is a young, rebellious punk rocker having a good time at a London nightclub with his friend and band mate, Gary Lester. John and Les struggle to get inside the restroom, but Les beats him to the urinal. Unwilling to wait any longer, John opens a window and begins to relieve himself. He soon realizes that right below him is his old mate, Chas Chandler sharing an intimate though unorthodox moment with a woman named Sheila in the bushes. As Chase begins shouting, John and Les run back inside the bar.

A woman named Angie White approaches John claiming to have "the book". John immediately loses patience with her, and demands to know what book she is talking about. Angie tells him that this book can tell the future, but John doesn't believe her. She insists that it is true, and that by speaking a person's name, the Book will reveal their entire lives to the reader, chapter by chapter.

Suddenly, an angry Chas storms in and sits at the bar. He begins complaining that someone poured some water on top of him while he was having sex. He has no idea that what soured his moment was not water, and he is also unaware that John is the one responsible. John and Les enjoy a laugh at Chas' expense.

Later, they all pile into Chas' taxicab, and drive off to see an affluent gentleman by the name of Stanley. Chas tells John that Stanley actually requested a meeting with him. They find Stanley boxing with a punching bag inside of a filthy, abandoned warehouse. Chas and Les wait inside the car.

Stanley invites John inside and offers him a beer. He tells him that he wants Rasputin's Clock, a mythical artifact that is reputedly in the possession of a mysterious individual known as the Arab. Even speaking about Rasputin's clock upsets John greatly, and he displays an apparent fear of the Arab. Regardless, he agrees to find the item for Stanley, but notes that such a deed will not come cheaply.

Meanwhile, Angie White returns to her flat and opens up "the Book". She speaks the name, John Constantine, and her eyes go wide.

Retrieved from "https://heykidscomics.fandom.com/wiki/Hellblazer_Vol_1_162?oldid=1433669"
Community content is available under CC-BY-SA unless otherwise noted.