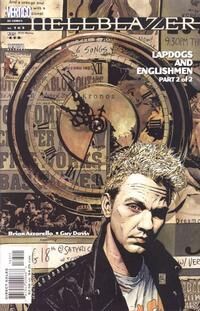 A clock that can forecast the future. What a load a bollocks. I mean, no matter what you do, it's the same for everyone. Ya get a dreary job, ya fall in love, ya have some kids, ya fall out a love, ya lose ya hair, ya get soft... it's ****ing depressing, so I'll have none of it!

Appearing in "Lapdogs and Englishmen (Part II of II)"Edit

Synopsis for "Lapdogs and Englishmen (Part II of II)"Edit

London, 1978
John Constantine emerges from a building carrying a wrapped parcel under his arms. He jumps into Chas' cab and they quickly leave. Chas feels extremely uneasy about their latest caper, but John tells him to leave all of the worrying to him.

They arrive at a dingy room of squalor where they meet with Stanley. Stanley is upset that John didn't come alone, but John quickly diverts the conversation. He unwraps the package, revealing Rasputin's Clock. Stanley tosses him a fat envelope stuffed with money. He tells Stanley that he stole the item from the Arab. He goes on to describe the previous owner as a savage man, who filed his own teeth down to points and only eats raw meat – preferably alive.

Suddenly there is loud knock at the door. All three men act nervous, and Les violently barges in. Terrified, he tells them that the Arab knows what has happened and that he is coming for them. Without warning, all of the light bulbs in the room explode, throwing them all into total darkness. Everyone begins freaking out, notably when Chas notices a pool of blood spilling out from behind a door. John and Les begin arguing, and John produces a gun. Les punches him and runs over to the clock. Stanley picks up the gun and shoots Les in the stomach. Chas opens the door and disappears in a fountain of blood. John closes the door behind him, and warns Stanley to get clear. Stanley grabs the clock and disappears out a back exit.

Once everything calms down, John begins laughing hysterically. Les gets up off the floor, and Chas comes out of the closet. The entire affair was staged to con Stanley out of a large sum of money. Rasputin's Clock was nothing more than a musty antique that belonged to Les' mother.

Meanwhile, Angie White has finished reading the future of John Constantine. She closes the book and stares at it with great forlorn. A mysterious well-dressed figure enters her room and walks up behind her. He asks if she enjoyed reading the life story of John Constantine, and more so, if she liked the role that he played in John's future. He opens the book back up, but all of the pages are blank now. He confesses that he is not comfortable with anyone knowing the part he plays in John’s life. The stranger snaps Angie's neck, collects the book, and walks out into the rain.

Retrieved from "https://heykidscomics.fandom.com/wiki/Hellblazer_Vol_1_163?oldid=1433670"
Community content is available under CC-BY-SA unless otherwise noted.