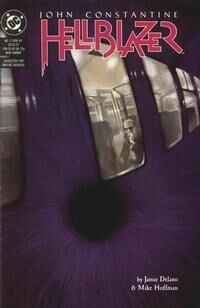 Anyone who'd launch something like this against a train-load of people has got to be a bad guy.

At the Geotronik security office, a Mr. Webster receives orders, and then assigns Doctor Fulton to choose a suitable psychic tracker to help him. Initially, Webster asks about young Mercury, who was recently kidnapped from a campsite at Wyke's Valley. Fulton suggests a Corporal Morgan instead. Webster explains that a soviet spy's corpse was found at the ley line site (confirming that John Constantine's experiences the previous night were not entirely hallucinatory).

Morgan is tasked with seeking the dead agent's partner, Sergei Antonov, with psychic tracking. Morgan senses that Antonov is moving before realizing that the man is on a train; the same train on which John Constantine is travelling. Morgan manages to identify the train's number and its destination as Paddington in London. Quickly, Fulton and Webster form a plan to use ley lines to intercept the train psychically, though Morgan may not be able to handle it alone.

Fulton has been developing some kind of fear machine, using the megalithic ley system for control. Using psychics to focus the emotional energy, the machine can send such fear along the ley lines as to cause death.

On the train, John is disgusted by the numerous examples of creeps and weirdos on the train. Grumpily, he makes his way to the washrooms in hopes of having a smoke. He is not unaware of the man who has been following him around all day.

Morgan's blast of fear then collides with the train, and the engineer's emotional response causes a lurch that catches John's attention. It isn't long before John is affected by the fear himself. The horrors he sees lead him to believe that the demons of Hell have finally come to collect vengeance after he defeated them three times. In their fear, the other passengers are tearing eachother apart, and John's selfish desire for self-preservation sends him running away. In order to prevent himself from dying as the other passengers are, John tries to focus on something in particular, and decides to look for the man who was following him.

Eventually, John finds his tail, but the man is obviously affected by the fear, and he runs away. After some observation, John realizes that the forces of this fear are actually after the man that he's chasing, and not him after all. One of the passengers gets in the spy's way, and ends up being shot. The wounded man stumbles over to John, and warns that if the train isn't stopped soon, it will crash. Fighting his own fear, John pulls the emergency cord. After the train stops in a wreck, Morgan loses track of his quarry.

John climbs out of the wreckage, and finds the man who had followed him. He determines that the man had spoken Russian, like the man he saw dash his brains out on the standing stone. John grabs the unconscious man's body and hides when he hears men coming. They're Webster's men, John is fortunate enough that a young woman in her underwear distracts them long enough for him to escape. John recognizes the man leading them as one of the men he saw at the Geotronik site, and realizes that these are the same people who took Mercury. John drags the man far enough away that he won't be found, and then continues on his way.

Afterward, Corporal Morgan expresses regret that he had to still be inside the heads of all of the passengers as they died of fear. After being told that it was a necessary duty, Morgan returns to his room, and sobbing, thrusts a pair of scissors into his eyes. Mercury is unable to shut out the sound of his sobs.

Retrieved from "https://heykidscomics.fandom.com/wiki/Hellblazer_Vol_1_17?oldid=1433523"
Community content is available under CC-BY-SA unless otherwise noted.