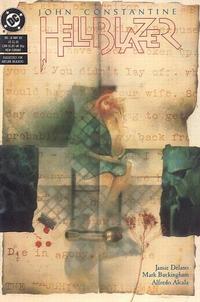 Can't help it. I always lie to policemen -- it's the way I was brought up. Not that I did much talking -- all I had to do was keep oiling the machinery, and it all came pouring out.

In London, Mrs. Joan Talbot hears more bad news on her radio, and watches as the mailman approaches. She dreads his arrival, knowing that there'll be more hate mail for her husband Geoffrey along with all the bills and junk. Today a letter addressed to "Mr. Clean Bastard Talbot" threatens to disfigure Joan with razors if Geoffrey doesn't leave the sender alone. Joan already suffers from depression, and this letter is the last straw. She takes pain killers before slitting her wrists in the bath.

In London, John returns to the Hotel Oscar Wilde, run by two homosexuals named Harold and Ken. They are interested by an article written by one of their own patrons named Simon Hughes, who seems to be investigating a series of suicides connected with Geotroniks. They also deliver Marj's letter, prompting a response.

John writes that he has not yet found Mercury, but that things are starting to move in the write direction. He tells of how he had run low on funds and was forced to sell a collection of rare Japanese pillow books to pay for his room at the hotel. Depressed by the loss, he decided to drown his sorrows at a terrible bar in Soho. There, he unexpectedly met with Detective Chief Inspector Geoffrey Talbot. Fortunately, Talbot seemed to have no interest in arresting John for the Paddington murders.

In fact, Talbot had become quite depressed over the pressure of being a good, clean cop when his compatriots are corrupt. He had begun to receive threatening hate mail and he faced either being transferred to traffic or getting sacked. John's interest was piqued when Talbot explained that he had been investigating corruption within the department and had discovered a secret black squad being run by Beales - a name John recognized as one of the men who was behind Mercury's kidnapping. John had helped Talbot home, only to find that his wife Joan had committed suicide.

Elsewhere, Mercury writes a diary of how she is being trained by Dr. Fulton to hone her psychic abilities. This includes using a device that uses ley lines to access the minds of people who are filled with fear, and then transferring that fear into a second device which stores it. Though Mercury has no problem dealing with the fears of others, the few glimpses she has seen of what is growing within the other device is beginning to scare her.

John decides to speak to Simon Hughes once his guest has left. The guest does not leave until late at night, but John cannot wait to find out what Simon knows about Geotroniks. He hears a sound from within the room, but no one answers. Eventually, he realizes that the sound is coming from in the wardrobe. Opening it, he finds Simon naked and hogtied, with a bag over his head.

Retrieved from "https://heykidscomics.fandom.com/wiki/Hellblazer_Vol_1_18?oldid=1433524"
Community content is available under CC-BY-SA unless otherwise noted.