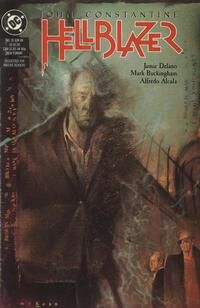 I'm an occultist -- I like to know what's going on behind the scenes. Bad things've been happening to people I like. I think it's going to get worse and I want to do something about it.

Appearing in "The Fear Machine, Part VI: The Broken Man"Edit

Synopsis for "The Fear Machine, Part VI: The Broken Man"Edit

Having heard a scream from the upstairs of their hotel, Harold and Ken burst into reporter Simon Hughes' room to find John Constantine struggling to save Simon's life. Simon had been hogtied and hung upside-down with a bag over his head in the wardrobe of his room. Harold and Ken are reluctant to call the police, given their hotel's reputation, and the fact that John is wanted for murder. Fortunately, Simon is alive, if quite shaken by the realization that someone tried to kill him.

John spends the night listening to what Simon has to say about the organization called Geotroniks, and the string of suicides among former employees. Geotroniks is a defense sub-contractor, supposedly working on a tracking system for nuclear armed submarines using the planet's electromagnetic landscape. John can see how that could be a cover for using ley lines as the delivery system for some kind of weapon. This would explain why the Russians had wanted it. He realizes that whatever it is must have been what the train he was on was attacked with. The Black Squad being run by Beales and Davis must have kidnapped Mercury, and are using her psychic energy to control the weapon somehow. However, even with all of that information, John wonders who might be behind all of it.

Elsewhere, Mercury has decided that she won't cooperate with her captor Dr. Fulton anymore. Though he had established a rapport with her, something recently changed the way she feels about the work she's been doing. The girl runs away, and enters the psychic device which uses the ley lines to extract fear from phobics and transfer it to a second device, which stores it. She warns that if he touches her body while she's psychically linked to the machine, she will release what hides within the fear-trap. As Fulton goes over the day's extractions, looking for anomalies, he wonders if the fear machine is producing some kind of background radiation filling those near it with fear.

Earlier, Mercury had helped a young boy with a fear of cancer to expel that fear and place it in the fear machine. With every extraction, Mercury had felt stronger and stronger, and she had reached a point where she felt she could handle seeing what happens to the fears once they're inside the machine. The thing that she saw inside made her feel the way she felt when she was nearly hit by a car at four years of age - dread; certainty of death. The creature she saw was a man called Siskin, who had been used for the same purpose as Mercury until he burnt out at the Wyke's Valley facility.

At the Pagan Nation settlement in Scotland, Mercury's mother Marj engages in a ritual meant to awaken magics that will help to find and return Mercury to her. This ritual is led by Zed, whose philosophy is one that places men below women. While Marj still wants and needs John Constantine's love, he will never know the mysteries that mothers share of love, sex, and life - that is a kind of magic that man can never know.

Mercury had encountered Siskin in the fear machine, and he had cried out for help. Unfortunately, he was beyond all help. He warned that the fear growing in the machine is much bigger than the Geotroniks people know - bigger than everything. As he is absorbed further by the fear within the machine, Siskin cries out the word "Jallakuntilliokan". Seeing this, Mercury realizes that it is time for her to take a stand and attempt escape. She wakes from her psychic trance, and uses her abilities to influence Dr. Fulton to take her out for a drive in his car.

John returns to London after a jaunt with Dream, to take Simon to meet Detective Geoff Talbot, who also knows about Geotroniks. He hopes that by pooling their resources, the three of them can figure out how to help Mercury and stop the fear machine. For the last three days, John has been followed by a homeless man who continually utters the phrase "I'm a broken man," though John has ignored him. With the man following them, John and Simon attend Talbot's wife's funeral, and try to convince him to help them.

Talbot agrees to help, as they enter the tube station. He decides that they should return to his house to meet a certain Russian man. Before John can ask about who this Russian man is, the homeless man leaps out and shoves a piece of paper into John's mouth. He then leaps in front of the oncoming train shouting out "Jallakuntilliokan!"

Despite the surprise of seeing a man leap in front of a train, John is more concerned about the paper in his mouth, and unfolding it, he sees that it states "Tremble. The G.O.A.G. is Coming." A symbol on the paper sends Simon screaming, when he realizes that the man who tried to strangle him earlier wore a ring that bore the insignia on the paper.

Retrieved from "https://heykidscomics.fandom.com/wiki/Hellblazer_Vol_1_19?oldid=1433525"
Community content is available under CC-BY-SA unless otherwise noted.