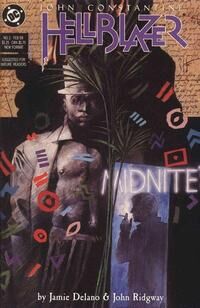 Guilt is the province of the living.

Appearing in "A Feast of Friends"Edit

Synopsis for "A Feast of Friends"Edit

After having been forced to run from the demon Mnemoth, because he is not a strong enough demon to handle it alone, John Constantine returns to the Midnight Club to beg Papa Midnite for help. He searches through the club's rooms filled with debauchery, down to the basement, where the arena is. Midnite justifies the violence of his arena show by having the contestants be mere zombies, but John is still put out - particularly by the spatter of blood on his face.

In the meantime, Papa Midnite has put Gary Lester into his holding pens, thinking him nothing more than bait for the demon. John finds that the more Gaz pleads for a drug fix, the easier it is to lie to him and detach. Gary is naturally unhappy with the arrangement to come, and worries that the demon will destroy him. John tries to ignore his pathetic old friend as Papa Midnite guides him away, warning that they will begin fighting the demon in the morning.

That night, after peeling off his stale clothes, John is haunted by images of his friends, killed during his attempts to fight the Brujeria and their Invunche. He tries to fight his feelings of fear by getting angry, and he turns to the ghost of Emma, demanding to know the meaning of the haunting. Frustrated, he tries apologizing for the fact that they were all killed on his watch, but his thoughts turn to Gary, and he supposes that they intend to make him feel guilty for what's to happen to him. Grumpily, John crawls into bed and shouts that if there is any guilt, it is his, and he will deal with it. Then, he tells the ghosts to sod off. They vanish, but as he is falling asleep, John hears Emma's voice wishing him goodnight, and he bursts into tears.

Meanwhile, Mnemoth's plague of hunger continues to infect the citizens of New York City. One victim begins devouring a pile of comic books, while another man satisfies his undying hunger by chewing off his own arm. Another man breaks into a jewelry store and begins voraciously shoving gemstones into his mouth. The city is in chaos. The demon continues, and is suddenly drawn to the pain inside Gary Lester - the hunger already inside him, and his craving for junk.

The following morning, John is roused from bed by one of Midnite's zombies. Up on the top floor of the Midnight Club, Papa Midnite is unimpressed by John's attempts at facile humour, and urges him to get down to business. John, however, is quite impressed by the electric chair that Papa Midnite acquired at acution from Sing Sing. 300 lives have gone to their ends at that chair, and that has imbued it with a powerful magic that they can use. Before beginning, John attempts to calm his old friend. It has little effect, so John bribes Gaz with a syringe of heroine.

As Midnite begins preparing for the binding, Gaz spies the cloud of insects on the horizon. Midnite kills a chicken and pours the blood out in a circle around Gary, who frantically warns John that he will never be able to trap the demon in a bottle, as its too big. John says nothing, and it doesn't take long before Gaz realizes that they don't have a bottle. He is to be the vessel in which the demon is bound. The only place they can catch the demon is in a place it wants to go - and that is Gary Lester.

John watches as his old friend is enveloped in the demon's cloud of insects, and they all pour into his every orifice. Quickly, John struggles to tattoo the binding symbols onto Gaz' skin before the demon escapes again. Suddenly, Gary wakes and rips free of the chair. he begins attempting to strangle John, but the Englishman manages to talk him out of it. He and Midnite wrap Gaz in a strait-jacket, knowing that in order to destroy the demon, Gaz and Mnemoth must devour eachother. Mercifully, John gives his friend the heroine fix he craved, attempting to be comforting in some respect. Kissing Gaz on the forehead, John calls for whisky and cigarettes, and heads downstairs as the demon begins to feed.

John drinks and smokes himself into a stupor, listening to Gaz' screams reverberate through the Midnight Club. Before passing out, he catches a glimpse of the ghosts that haunt him tending to the Gaz' corpse. John is not welcome. With Gaz dead at last, Midnite orders the holding pen bricked up.

As Constantine leaves the club, he sees Gary Lester's spirit join with those of his former comrades.

Retrieved from "https://heykidscomics.fandom.com/wiki/Hellblazer_Vol_1_2?oldid=1433508"
Community content is available under CC-BY-SA unless otherwise noted.