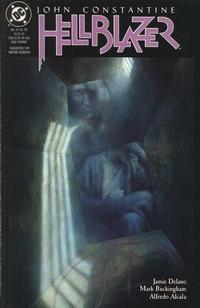 Then, like the breaking of a dream, I hear the word again -- howled with the raging breath of fear in the madness on the train. Jallakuntilliokan.

Having influenced Dr. Fulton to take her to the train station, Mercury makes her escape from him. He knows he's been tricked, and that when she goes, his life's work will go with her. Within moments of her leaving, Fulton is arrested. In his jail cell, he admits to himself that he had expected her to do this to him. Despite her young age and his knowledge that she would become his nemesis, he had dreamed that they would become lovers. Yesterday, he had felt happy as she influenced him to run away with her, and they spent the day together. That morning, though, he knew that she would leave, and he knew that he would be killed for it.

Before seeing the Russian that Geoff Talbot is harbouring in his home, John Constantine and Simon Hughes agree to stop for a drink. John cannot get the word that was spoken by the man who leapt in front of a train earlier out of his head: "Jallakuntilliokan".

Talbot explains that the Russian had come to him after hearing of his fight with the Freemasons, claiming to be a paranormal scientist for the KGB. The Russian had claimed that the Freemasons were behind the train crash that John had survived just weeks ago. John is sure that this Russian is the same man that he pulled from the train. When they arrive at Talbot's place, this theory proves true, and the man is hardly happy to see him.

Elsewhere, Mr. Webster reports of Fulton's arrest to the director of Geotroniks, promising that justice will be done. The director is overwhelmed by how soon their plan will be coming into effect, so Webster advises him to stick to his smaller duties. As director, he must direct. As hangman, Webster must hang. Afterwards, Webster makes his way to the laboratories where the fear machine is being kept. Soon, will be the rise of his god: Jallakuntilliokan.

After resolving Sergei's confusion about John's motives, the group of men struggle to determine what they can do to stop Geotroniks. Despite each of their dramatically different backgrounds, each has a motive to stop these men who wish to unleash fear on the world. John is sure that it will take some kind of magic to stop this "Fear Machine". He pops off to the store for some painkillers before they get down to business.

Elsewhere, Davis, one of the Black Squad, is called to the office of Mr. Beale, who runs it. Beale reveals that he intends for the squad to take control of the country with the help of his visionary superiors. For months, the Black Squad has been weakening the peripheries of society in order to reduce resistance to the coming change. Beale then ordered Davis to form a death-squad and take out Talbot and the Russian he has been harbouring.

Elsewhere, Webster picks Fulton up from jail, and then, with no resistance from his victim, hangs the doctor to death from a suspended bridge - just as in Mercury's visions.

Returning too late, John watches as Davis drags Talbot out of his home and shoves him into the back of a van. Before they leave, John steps out and demands to know where he's being taken, under the guise of a CID officer. Davis dismissively gives John the extension for the home office. Despite having lost all of his team, John is sure that he can get a name with the number. He decides first that he should do some research on the Masons.

Elsewhere, Webster begins his ritual. He takes the boy Matthew Reilly from his room in the facility, and garrotes him to death in the room of the Fear Machine. Then after stabbing the corpse brutally, he uses the boy's blood to write "G.O.A.G." on one of the ley stones. This is all that was needed to call upon the creature growing within the Fear Machine: Jallakuntilliokan.

Retrieved from "https://heykidscomics.fandom.com/wiki/Hellblazer_Vol_1_20?oldid=1433526"
Community content is available under CC-BY-SA unless otherwise noted.