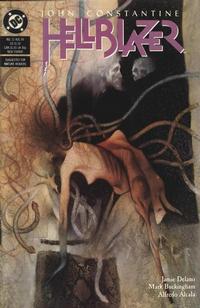 It's serious magic, Errol. The sort that changes things -- permanently.

Appearing in "The Fear Machine, Part VIII: The God of All Gods"Edit

Synopsis for "The Fear Machine, Part VIII: The God of All Gods"Edit

In the room of the fear machine, the director of Geotroniks comes upon Mr. Webster, who has murdered the phobics and paranoiacs from whom they had extracted the fear to power the machine. They are sacrifices in Webster's mad plan to bring about the arrival of the dragon Jallakuntilliokan. The director announces futilely that the grand lodge of Freemasons has ordered that their operations be shut down, but it is too late. Webster's ritual has already begun.

Meanwhile, John Constantine has strong-armed Chas Chandler once again into driving him to Scotland to meet with Marj and the Pagan Nation. However, it is apparent that something supernatural is happening - something bad. The sky is raining down blood, and John is convinced that the end of days is on its way.

Earlier, John has been researching the Freemasons when he was suddenly overcome by a feeling of sickness. He had wanted to just run to Scotland to be with friends and lovers, but he had promised to find Mercury, and he would. He called the home office extension that he was given by Davis, and was informed that the man to speak to was the Parliamentary Under-Secretary. As it happened, John knew Bartholomew Carter-Brown, the Parliamentary Under-Secretary, having once hypnotized him into describing his involvement in a sexual voodoo ritual with a Haitian envoy's daughter who had consequently turned into a crocodile.

John caught up with "Binky" Carter-Brown in the street, demanding to know everything about his involvement with Geotroniks and the Freemasons. Though Carter-Brown denied it, John pointed out that the Under-Secretary wore one of the Freemasonry rings, and the man gave in. With some prodding, Binky explains that the "G.O.A.G." that John had seen on a flyer stands for the God of All Gods, whose secret name is Jallakuntilliokan. The ley lines were being used as the delivery system for some kind of psychic weaponry meant to cause unrest and force change. The system required the kidnap of a young girl - Mercury - who was later allowed to escape. Meanwhile, the whole setup was dismantled, and Geotroniks shut down. John and Carter-Brown parted ways, as the latter wandered onto the grounds of Buckingham Palace, making just how high up the conspiracy goes apparent.

Mercury stops at a restaurant on her own way to Scotland, but her appetite is ruined because she can't separate herself from the mind-world in which the creature of fear resides. She is surprised to hear John Constantine's familiar voice at the counter, and she runs over to him, hugging him tightly. John is just as happy to see her, glad to know that he has not lost her forever. To Chas' chagrin, John promises to take Merc back to Scotland to her mother Marj.

In the room of the fear machine, Harold, Ken, Simon Hughes, Det. Geoff Talbot, and the Russian spy Sergei Antonov all wake in a cage. They are all horrified by the scene before them. A hangman's rope swings on the other side of the bars, and the severed heads of Webster's victims taunt them. Talbot deduces that given the presence of other cages, more prisoners must be expected. The cages are wooden, so their captors must not plan on keeping them for long.

They soon discover that one of the nearby cages holds another victim. It is the Geotroniks director, and Simon recognizes him as one of the men who had attacked him earlier. The director claims to have only been following orders from the grand lodge. However, when the lodge had called off the experiments with the fear machine, Webster refused to obey. He beat the director and threw him in the cage. Suddenly, Webster appears, confirming their suspicions that they will all die there. He plans to kill each of them at regular intervals, sacrificing them to the draconian Jallakuntilliokan. The first sacrifice will be the director.

John finds the Pagan Nation settlement to be not altogether what he expected. They were all happy to see he and Mercury, but Zed didn't even recognize him, and something strange had happened. A big storm had hit the settlement, and some kind of dark magic had killed several of the male members of the group, hanging their bodies from trees, the branches piercing through their limbs. John determines that this is serious magic, the kind that can change things permanently. He decides that he will find a way to overcome that magic by joining with it.

John heads to the stone circle at one of the ley line intersections, and begins meditating. He is drawn into the magic, where he can see Simon Hughes being murdered and brutalized by Webster. With Simon's sacrifice, John can sense the creature in the centre of the fear machine growing stronger. This creature is Humbaba, father of the dragon, whose mother is the earth. The creature entices John to join it, but Mercury enters the mind-world and urges him to return to his body before he is absorbed.

Though John is returned safely, Mercury is all that is left to hold Humbaba in the circle, and prevent the coming of Jallakuntilliokan.

Retrieved from "https://heykidscomics.fandom.com/wiki/Hellblazer_Vol_1_21?oldid=1433527"
Community content is available under CC-BY-SA unless otherwise noted.