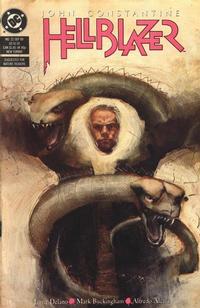 No time. You've done your part. Now it's time for femaleness.

John Constantine wakes from a disturbing dream of serpents and blood to find Zed sitting before him. She does remember him after all, but she won't listen to him explain his feelings for her. She describes how the Resurrection Crusade had told her that she was meant to mother a god, and how she hadn't know what that meant at the time. Now she does. John is overcome by his desire for her, but she stops him. They have work to do. Mercury is preparing herself for what's to come, and John has as much a part to play in the magic that will be as everyone else.

Geoffrey Talbot is forced to watch as his only remaining companion is taken away by his nemesis Davis; taken up to Webster's gallows. Sergei Antonov looks back at Talbot and warns him not to give up hope, as it is their only defense against fear. He asks that if Talbot survives, he should tell his wife that he loves her. His words are cut short by the hangman's rope, and finally, Webster dismembers her. Silently, Talbot thinks to himself that their only hope is death.

Around the fire, John explains the situation with Geotroniks' fear machine and the Freemasons' involvement. He explains how Webster is bent on raising up the God of All Gods. Zed responds that the God of All Gods is the Earth, and the power of life flows through it - male and female - in a harmonic force. However, it is not the ley lines through which their energy flows. At this, John realizes that the ley lines are merely an attempt by male sects to dominate the female energy. There are no straight lines in nature, after all. Zed explains that the real force which flows through the earth is the dragon's - Feng Shui. It is a ying and yang of male and female energy.

Webster and the Masons - a patriarchal society - are attempting to raise up Jallakuntilliokan by breaking the taboos of murder and torture. But that is only the male portion of the earth's energy. Without the female half to balance it, the dragon's energy will be dispersed chaotically. Webster is allowing the Terror-Thing that Mercury helped to create while kidnapped by Geotroniks to wreak havoc by using the ley lines. John believes that if they can isolate it from its power source by disrupting the ley system, the energy being used to revive Jallakuntilliokan will die down.

With the help of Eddy's group, John hopes to disrupt the ley energy by driving copper stakes into the stone circles. He tries to go with them, but Zed orders him to stay and help with the ritual.

Elsewhere, the Grand Master of the the Freemasons orders that Bartholomew Carter-Browne, a parliamentary under-secretary, be hanged from a bridge as punishment for losing control of the forces at his disposal.

Meanwhile, Geoffrey Talbot watches as Davis drags Sergei's headless carcass away from the gallows, and awaits his chance to wrap his hands around the throat of the man who drove his wife to suicide. As Davis approaches, ready to take Talbot for his turn, he is distracted by a ghostly visage of a girl. The distraction is just what Talbot needs to grip Davis by the neck and start throttling.

Later, John remembers seeing Marj head upstream towards the waterfall, and follows. She is bathing in the water, and when she sees him, she tells him that she missed him, but then when he was gone, he had felt so distant. Eventually, she hit it off with Zed. As Marj gets dressed in front of him, John can't help but want her. She stops him, and explains that they will have a chance to be together later - Zed had said so.

In the mind-world, Mercury can see as Geoffrey Talbot unwittingly provides Webster with his final sacrifice by strangling the life from Davis. The Terror-Thing grows, but it is merely just a speck, bait for a veritable leviathan. Jallakuntilliokan is coming.

John and Marj arrive at the stone circle in time to see that Mercury has already started. Zed explains that Mercury has volunteered to be the bait for the dragon. She undresses John, amid his protests, and then they undress too. John's role in this ritual is a primal one. As he used Zed to prevent the Resurrection Crusade from raising up a God, she and Marj will now use him to raise up the female dragon to balance out the male. This will be a ritual of femaleness. Despite his displeasure at being used, John's need for both women is strong, and he falls into them.

The three of them make love as Mercury does her best to dodge the massive maw of Jallakuntilliokan. When John is spent, Zed suddenly screams out, and becomes pregnant with the female dragon. Marj midwives a massive egg from her, and the two of them rush toward the stone circle to bring forth the dragon, leaving John screaming for attention.

Futilely, he gives chase, hoping to at least see the birth of the egg that he helped create. As the female dragon bursts up from the ocean, it intertwines with the male. John realizes that together, these are the God of All Gods. As he nears the circle where the women have gathered, John finds himself swept away along with them in a massive wave of seawater.

Some time later, John wakes on a sea-faring boat off the coast of Scotland. The newspaper claims that the civil unrest in the UK has been quelled. John's memory is a little fuzzy, but he can at least muster up the strength to ask for a cigarette.

Retrieved from "https://heykidscomics.fandom.com/wiki/Hellblazer_Vol_1_22?oldid=1433528"
Community content is available under CC-BY-SA unless otherwise noted.