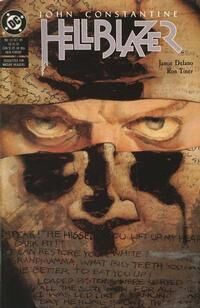 All these writers putting you into their books have blurred the edges more. Now more people think you're a work of fiction than know you as a man.

Appearing in "Larger Than Life"Edit

Synopsis for "Larger Than Life"Edit

It's been three weeks since John Constantine was fished out of the ocean after his friends Zed and Marj raised the dragon. Now, he is hitchhiking to the Borough of Northampton, to meet his friend Jerry.

Jerry is prone to prosaic speech, and he refuses to stop treating has life as though it is a work of fiction. At first, Jerry is reluctant to let John inside, and his reluctance proves worthwhile when a blind man pushes his way past John, through the door. The man delivers a scrap of paper to Jerry, before John manages to chase him out into the street. Somehow, John loses track of the man outside.

Jerry explains that the blind man came to give him the black spot - the legendary sign of doom for all pirates. As it turns out, Jerry has recently been plagued by visits from storybook characters. Just recently, Sherlock Holmes had come to his door and warned that Jerry had out-stepped his bounds, and belonged to literature - not the real world. He warned that someone would be coming for Jerry soon.

John decides to take his friend out drinking, but the bar they attend is full of characters from storybooks, and they are forced to sneak out the back. Eventually, Jerry is ensnared in a trap by the storybook characters, who lead him into the public library. John attempts to follow, but Sherlock Holmes prevents him from entering. Inside, the many characters hold a trial against Jerry for bending the lines between fact and fiction.

John watches as Jerry is sentenced and taken away.

Retrieved from "https://heykidscomics.fandom.com/wiki/Hellblazer_Vol_1_23?oldid=1433529"
Community content is available under CC-BY-SA unless otherwise noted.