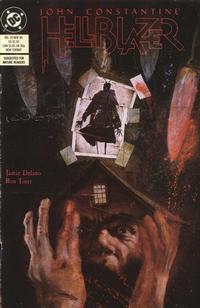 Something here is adding up to a bloody funny number.

Appearing in "The Family Man"Edit

Synopsis for "The Family Man"Edit

John Constantine has decided to stay in the home of his friend Jerry O'Flynn, who was recently taken away by people who John assumes were pretending to be storybook characters. He figures that Jerry won't mind if he makes himself at home.

John discovers a safe in the house, and can't help but try to get inside it. Using divination, he determines what he combination is, and opens the safe. He is somewhat taken aback to see that it is full of money and drugs. John had expected something a little more classy. John counts out the money, but suddenly hears the doorbell. Worried that it will be the police, he grabs the cocaine from the safe, and dumps it down the toilet.

At the door is a slim old gentleman who inquires after Jerry. John invites him in, advising that Jerry is away with family. The man helps himself to some brandy, explaining that he and Jerry have a longstanding appointment in which they trade certain trivia. He motions toward an envelope on the hearth, which John retrieves for him. In exchange, the man leaves a package. Before leaving, the man asks to use the lavatory, and John obliges. While the man is indisposed, John sneaks a peek at the contents of the envelope. The contents appear to be an address, a photo, and an accounting of the family who lives there.

Becoming uncomfortable with the number of callers he's getting since moving in to Jerry's place, John decides to take the money he found and run. While packing, he happens to find a book of Jerry's accounts. John recalls that Jerry was always something of an addict - but it was never the drugs he was addicted to; it was the trade.

A man named R.H. seems to have been associated with some of Jerry's biggest deals. A flyer falls out of the account book; for a family game show called "Happy Families". Another book contains similar lists to the one that was given to the old man earlier. John begins to suspect that something strange is going on.

John discovers a diary, and begins reading from it. He reads of how Jerry came to meet with R.H., whose particular penchant was for serial killer memorabilia. Jerry would acquire it by certain means, and R.H. would pay handsomely. Eventually, though, R.H.'s desire grew to the point that he demanded souvenirs from a killer who was still active, referred to as F.M. In order to fill that order, Jerry had actually found a way to contact the killer, and in exchange for souvenirs for R.H., Jerry would provide the killer with the only thing he wanted: victims.

John is disgusted with the man he once considered a friend. As he marches back downstairs, the phone begins ringing. The man on the other end of the line introduces himself as Reed Hackett, and wonders if his parcel has arrived yet. John realizes suddenly that the old man he met earlier was the murderer in question - The Family Man. He looks for the parcel that the man left behind, and opens it. Inside is a child's thermos filled with blood. In disgust and anger, John puts piles the money he had planned to steal into a corner, covers it in liquor and sets it ablaze. He will go to the address he saw earlier, and hope he is not too late to make things right.

Meanwhile, in Dogthorpe, Peterborough, Peter Lucas had the sudden impulse to spend the day at home with his family. A knock comes at the door, and he is greeted by an elderly gentleman in need of assistance.

Retrieved from "https://heykidscomics.fandom.com/wiki/Hellblazer_Vol_1_24?oldid=1433530"
Community content is available under CC-BY-SA unless otherwise noted.