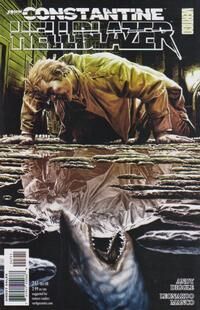 The Tate Club told me to go !@#$ myself. Why should I stick my neck out for that bunch of self-important tossers?

Appearing in "The Roots of Coincidence (Part I)"Edit

Synopsis for "The Roots of Coincidence (Part I)"Edit

John Constantine travels to the Basilica di San Nichola in Bari, Italy where he exhumes the remains of Agios Nikolaus, aka, Saint Nicholas, aka Santa Claus. In order to get the remains transferred back to London without raising suspicion, he has the skeleton ground into bone meal.

In London, two sensitives named Clarice Sackville and Brother Chalice meet to discuss the actions of Mako, a cannibalistic mystic who has been slaughtering psychics throughout London. Sackville determines that there is strength in numbers and has arranged for the surviving psychics to meet in one place. When they reach the meeting hall however, they discover to their horror that Mako has already found them. The room is filled with the bloody, eviscerated bodies of other psychics.

Meanwhile, Lord Burnham conducts a meeting with his aides at the Brinkley Point nuclear waste storage facility. His ally Mako arrives and his brutish nature upsets Burnham's staff. Burnham takes Mako aside and they go over their secret plans. Burnham desires immortality, but to facilitate this, he needs Mako's help in finding the mysterious "Laughing Magician". In exchange for Mako's help, Burnham offers him the Hell Mirror.

Constantine finally returns to London and uses the ground remains of St. Nicholas' skeleton in a ritual designed to yield information about the Laughing Magician. He inadvertently invokes the essence of an African mystic, who warns Constantine that his search for the Laughing Magician has placed him on the "synchronicity highway". Some time after the essence dissipates, Constantine decides to snort St. Nicholas' ground remains. He muses to himself, "...looks like it's gonna be a white Christmas after all".

Retrieved from "https://heykidscomics.fandom.com/wiki/Hellblazer_Vol_1_247?oldid=1433754"
Community content is available under CC-BY-SA unless otherwise noted.