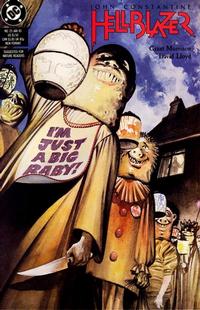 Someone just walked over my grave.

John Constantine hitchhikes to the village of Thursdyke, where his old acquaintance from Ravenscar, Una, has called him to witness a parade.

The village is in a dire state, as the US Army has put a nuclear base near to the town, where the people can find jobs, since the pits shut down. Unfortunately, a faction of the village is opposed to the nuclear base, and the city is divided between those who depend on the base for their livelihood, and those who protest the base's existence.

Deep inside of a cavern dug into the side of a hill, a Professor Horrobin explains to Doctor Poole that he hopes with his experiments to metaphorically wake the sleeping god-kings within the earth. He plans to manipulate the invisible energies within the earth, the result of which could turn men into angels - or demons.

Una takes John to visit with the local priest, Godfrey Bayliss, who also happens to have once been a protester of nuclear arms. Bayliss is not entirely comfortable with the idea of the town's annual pagan parade, but a united community is better than a divided one. Bayliss explains that while there's still the missile base to worry about, there are also more mysterious forces within the earth; vaults underground owned by the Ministry of Defence. Perhaps far more terrible weapons than nuclear missiles are being imagined down there.

That night, at four in the morning, the parade begins. John wakes in the middle of the night to the sound of the parade outside, but he can feel a certain vibration within the earth that unsettles him further.

In the church, Bayliss asks God for a sign, and the stained-glass windows of the church shatter and rain down on him. Covered in his own blood, he rushes out into the parade.

John puts on his jacket and goes outside. Elsewhere, a father and son break into their daughter's room and abuse her. The butcher begins to prepare his knives to castrate a teenage boy. A mysterious force is causing the town's people to give in to their base desires.

Deep under ground, Professor Horrobin confesses to Poole that he finally let his dreams for his project get the better of him. He bombarded the town with microwaves, setting them to resonate with the frequency of the human brain. All of the unconscious desires and fears and repressed longings of the townspeople have been set free. The sleeping giants have awoken.

Somewhere in town, a man in a baby costume bludgeons his wife to death because she seemed to love their baby more than him. Then he proceeds to turn his ire on the baby itself. Elsewhere, a man removes his dogs' eyes with a fork.

Hearing the call of the people in the parade, John puts on his own costume, and joins them.

Retrieved from "https://heykidscomics.fandom.com/wiki/Hellblazer_Vol_1_25?oldid=1433531"
Community content is available under CC-BY-SA unless otherwise noted.