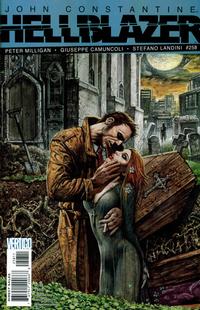 The spirits aren't so different from anyone else. They see what they want to see.

John Constantine rushes to Phoebe's apartment only to find that she has been killed by Ekkimu. John starts gathering supplies to cast a spell when Phoebe's friend Aisha walks in and finds the body. She immediately thinks John killed Phoebe and calls the police. John castas a spell to stop the body from decomposing and disappears before the cops arrive.


John meets with Chas and tells his friend that he plans to resurrect Phoebe. He goes to see Epiphany Greaves, figuring that she must have a potion that can do what he requires. Epiphany's father, Terry Greaves, arrives and warns off Constantine. When Constantine leaves, Epiphany meets up with him and that night, the two go to the graveyard where Phoebe has been buried.


Epiphany tells John that the potion only works if the person using it is pure of spirit. They unbury Phoebe and break open her coffin. Epiphany sprays John with the potion and John calls on Phoebe to return from the dead. The spell causes Phobe's entire family to rise from the dead, but not her. One of them kisses Epiphany and John takes its head off with a shovel. John discovers that the dead kiss has caused Epiphany to lose consciousness. He goes about burying the rest of Phoebe's family. As morning arrives, Constantine waits with the unconscious Epiphany at her car, anticipating trouble from her father.

Retrieved from "https://heykidscomics.fandom.com/wiki/Hellblazer_Vol_1_258?oldid=1433765"
Community content is available under CC-BY-SA unless otherwise noted.