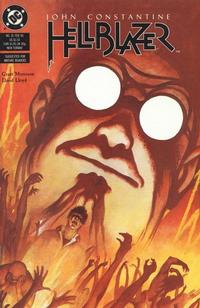 You just about blew up the north of England, you stupid bastards! The missiles! Did you touch them?

Appearing in "How I Learned to Love the Bomb"Edit

Synopsis for "How I Learned to Love the Bomb"Edit

Having been affected by microwaves from a secret facility hidden in the hills near the village of Thursdyke, Father Godfrey Bayliss is stripped by the townsfolk and annointed as Archbishop Bomb. In his new garb, he leads the villager's protesters against the local missile wing. There, he orders his troops to tear down the walls. Within the facility, the security guards are not impervious to the effect of the microwaves, and one of them fires a shotgun into his mouth.

Elsewhere in the village, the annual parade has got out of control with base desires taking control of each citizen. Rapes, murders, orgies - all are committed without remorse. From a nearby alley, Una - a reporter - watches wit horror. She is particularly upset when she spots John Constantine in his own mask, leading a faction of the parade away. She rushes over to him, yanking the mask off of his head, and tossing it into the river nearby. She places a pair of earphones over his head, and the sound cancels out the frequency of the microwaves, freeing him from his trance. Meanwhile, the faction he had been leading follows the mask right into the water.

At the missile base, the remaining guard begins to get very agitated, and threatens to fire on the approaching protesters. In his nervousness, he fires a blast at Archbishop Bomb, knocking the man from his feet. Miraculously, the man rises up, as though unaffected.

Deep within the caverns under the village, Professor Horrobin explains with some irritation that he has released the sleeping giant; unchained Prometheus. The nervous Doctor Poole begins to feel uncomfortable, and questions the nature of the machine that the professor has created. The professor turns on him, reminded him that he cut Horrobin's project funding. Then, with a hammer, he bludgeons Poole to death.

Across Thursdyke, the villagers become even more slave to their base desires and instincts.

Una takes John into a local disco, explaining that certain kinds of rhythmic music seems to be able to block out the frequency that is affecting the other villagers. She had been listening to Sonic Youth on her Walkman at the time of the parade. John is more than a little upset that he was taken by like an amateur by the force. He realizes that whatever this force is, it is letting all of the repressed things within the townsfolk come out. Una seems uncomfortable, and she explains that she has stopped taking her medication.

Una believes that the town of Thursdyke is committing suicide. Not just the villagers, but the town itself is destroying itself after years of failure and neglect. She senses from the voices in the soil that Parson Bayliss is leading the CND protesters to the missile base. John realizes that because the bombs there give the protesters' lives meaning, they have begun to treat them like a religion. He realizes that he needs to go there and stop them.

The van outside needs to be hot-wired, and John struggles to get to the base before Bayliss and the protesters set off the missiles. He arrives, blaring loud music, which snaps some of the protesters out of their trance. He manages to prevent them from touching any of the bombs, but he is too late to stop Bayliss from getting into a fighter jet, and taking off.

Meanwhile, Una's safe haven in the disco suddenly goes pitch black and silent, as the marauders outside cut the power to the building. They drag her outside, and put her in a car full of flowers, which they will use as a pyre for her sacrifice to the god of dawn. Above them, Bayliss' jet approaches. He releases his payload, and the village of Thursdyke is wiped from the face of the earth.

The next morning, John watches as a news team reports on the tragedy that took countless lives. He hears that the Prime Minister is meant to be coming to show her support, and it is claimed that a radical anti-nuclear group was responsible. Angrily, John steps into the shot and decries the report as lies before wandering away.

John understands now that this town was never alive to commit suicide. It died years ago. He sifts through the rubble and finds Una's camera. Knowing that she is dead, and feeling responsible, he drops it to the ground again, and trudges away.

Out on the side of the road again, John happens to catch the same trucker who had dropped him off at Thursdyke, and the man takes him back to London.

Retrieved from "https://heykidscomics.fandom.com/wiki/Hellblazer_Vol_1_26?oldid=1433532"
Community content is available under CC-BY-SA unless otherwise noted.