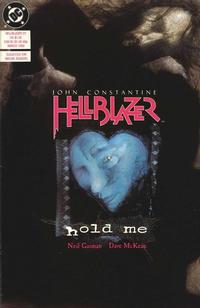 What is it with you people? Do I have some kind of sign on me back, "Walking Sperm Bank - Withdrawals Welcome"? Is that it?

Winter and spring in London have grown ever colder, and three homeless people - Fat Ronnie, Sylvia, and Jacko - have been kicked out of a number of places where they have tried to sleep and find shelter. Eventually, Sylvia and Ronnie found a place to sleep, wrapping themselves in a torn down curtain, and huddling together. Jacko knew that the curtain would not be enough to keep them warm, and continued in search of some kind of warmth.

Elsewhere in London, John Constantine hails a cab to take him to the home of his late friend Ray Monde, for a party in Ray's honour. Eventually, he becomes so annoyed by his cab driver's bigotry that he decides to walk the rest of the way.

Outside the building, John bumps into a homeless man, who asks for a cigarette. The man admits that there have been a lot of homeless people in the area lately. The other night, he had been beaten up by a couple of drunken yuppies. John gives the man a quid and some cigarettes before moving on, thinking that there had not always been such a large homeless population.

Somewhere nearby, a woman is startled by her daughter's cries, claiming that a man in her bedroom. The woman rushes up the stairs to find that there is indeed a man in the room - Jacko. He turns to her, and begs for her to hold him. She cries out in horror, and when he touches her, she falls to the floor, cold as ice.

At the party, John is introduced to a woman named Anthea. The pair begin talking about the AIDS scare, and John admits that he has been tested for it. Despite certain anomalies in his blood, he is clear of AIDS. At this, Anthea claims to be feeling ill, and asks John to walk her home. Despite sensing that something is not right, John agrees.

On the way, Anthea explains that she helps to manage a homeless shelter. Unfortunately, they can only house people for a few days at a time, so many people end up back on the streets. Entering her building, John is overwhelmed by a foul smell. Anthea explains that the smell had appeared some months ago, and eventually it was discovered that a pair of homeless people had been found dead, wrapped in a curtain in one of the empty apartments. Their bodies had putrefied to the point that they were stuck to the carpet, and now the smell won't go away.

John suggests that if Anthea is still feeling ill, he will be on his way, but she claims to be fine, and begins to create a romantic atmosphere - confirming John's assumption that she fancies him. John recalls that she had mentioned a flatmate named Sarah, but Anthea responds that she is out for the night. Anthea leans in and says "give us a kid." John thinks he has misheard her, and she corrects herself to say "give us a kiss."

John gets to thinking about the names Anthea and Sarah, and realizes that he had heard Ray Monde speak of them before. They are lesbians whom Ray had noted were quite inseparable. John identifies her as that Anthea, and the woman explains that she and Sarah have come to want a baby, but they can't do it on their own. She had planned to tell him after he had served his purpose.

Angrily, John gets up and begins putting on his coat, complaining that everyone seems to think of him as a walking sperm bank, lately. His pride hurt, John steps out into the night, commenting that Anthea could at least have asked. As he walks the street, he encounters a little girl crying. The girl introduces herself as Shona, and explains that a smelly man had come through the wall and hugged her mother. Now, her mother is cold and motionless on the floor. John can't let the girl's concerns go unanswered, and asks to be taken to the apartment.

John investigates, and discovers that Shona's mother has been dead for some hours, and feels cold like she's spent time in a freezer. It's unnatural. John explains to Shona that her mother is dead, and then takes her to Anthea's place. He explains that Shona can be her child, for as long as it takes before someone comes for her. He then instructs her to call the police if he doesn't return in half an hour.

Against his better judgment, John picks the lock on the door to the condemned apartment where the two dead vagrants had been found. The smell is overwhelming, but he carries on. He feels an unnatural cold and calls out to see if someone else is there. Jacko shuffles toward him, begging to be held. John asks the man's name, and after some hesitation, Jacko obliges, adding that nobody seems to care about him. John realizes that Jacko is long dead, but he just wants to be held. John opens his arms to the man, and shares some of his warmth. Some moments later, Jacko disappears, leaving John feeling cold.

John understands that while holding each other doesn't make the darkness go away, it does make people feel better. He returns to Anthea's place and asks her to hold him.

Retrieved from "https://heykidscomics.fandom.com/wiki/Hellblazer_Vol_1_27?oldid=1524766"
Community content is available under CC-BY-SA unless otherwise noted.