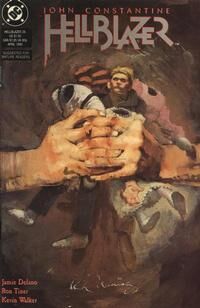 Jesus, this is serious. No wonder I've been hiding from it. Murder, it's got a pulse all its own -- slow, cold electricity. If it comes down to it, Constantine -- do you really think you can do it?

Appearing in "Thicker Than Water"Edit

Synopsis for "Thicker Than Water"Edit

Samuel Morris dreams of his youth, when he had come entered his parents' room late at night, and then murdered both of them out of what he called love. After finishing the deed, John Constantine appears, wielding a hangman's noose, and Samuel wakes up. He is much older now, and he has been staying in a home for the elderly.

In his London flat, John wakes from a nightmare to a knock at the door. Standing before him are the mutilated corpses of the Cass family, who blame him for their murder at the hands of the Family Man - who was directed to them by John, unwittingly.

Morris is allowed to leave the home, finally, and he takes a cab to Northampton, having lied to his nurses that he was going to stay with his sister in Brighton.

John wakes up from the nightmare of the Cass family, realizing that they were serving as analogues for the Lucas family, whose address he had delivered to the Family Man at Jerry's house. Surely, they are already dead, as John has avoided dealing with the issue for three months, because admittedly, he is scared. He is scared because he had liked the man before he had known he was a murderer. Reluctantly, John admits to himself that he must find the killer and stop him.

Morris, himself a retired police detective, meets with Inspector Kenny Balfour at a pub. Unwittingly, Kenny divulges that the police are no closer to finding the Family Man. However, he has come up with the requested information - a background check on John Constantine. Apparently, John's father Thomas is still living in Liverpool, though John himself has never been much of a family man.

Remembering that Jerry had sold memorabilia from the Family Man killings to crap-movie producer Reed Hackett, John visits the man's office claiming to be Jerry O'Flynn. When he meets Hackett, he identifies himself as the Family Man, and demands to see the memorabilia, and to know why Hackett wants it. The man tries to justify his actions, but John, disgusted, throws him to the floor. As he begins to leave, Hackett entrusts John with an invitation meant for the Family Man to a convention for serial murderers as the guest of honour. Hackett assumes that he will be killed, but John simply leaves him behind.

After meeting with Thomas Constantine, finding out some of his history, and extracting information about John's whereabouts under false pretenses, Morris kills him, and attempts feebly to wash the blood out of his coat.

John calls the police, and has them come for Hackett. He stands outside and watches as the police drag him out of his office. As the reporters crowd around, John surreptitiously makes his way into the background of the photos, ensuring that the Family Man will see that he was involved.

That night, in John's own area, Morris dines at an Indian restaurant, and while the proprietor is involved in a dispute over the bill, he murders the owner's family.

John soon hears about the murder from the television, and realizes that the Family Man is already aware of him. He won't have as much time to plan as he thought. Returning home, he thinks about what he ought to do. Something inside him knows that he may have to kill the killer, and he's not sure he's okay with that.

Retrieved from "https://heykidscomics.fandom.com/wiki/Hellblazer_Vol_1_28?oldid=1433534"
Community content is available under CC-BY-SA unless otherwise noted.