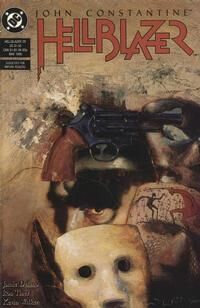 He's killed him, Chas. The bastard's done my dad. I should've thought. He always goes after families. If he gets me he'll kill Cheryl and the kid. I've got to get ahead of him.

Appearing in "Sick at Heart"Edit

Synopsis for "Sick at Heart"Edit

John Constantine dreams of using a bread knife to cut off the serial murderer the Family Man's arm, and then thrust it into the man's gut. However, the Family Man transforms into Thomas Constantine - John's father, and he feels responsible.

With a start, John wakes in his seedy apartment above Eddie Morgan's betting shop, where his friend Chas has let him stay. It's still dark out, and the sound of someone entering the building sets John on edge. Still clutching the bread knife he fell asleep with, John sneaks downstairs and attempts to surprise-attack the intruder. The intruder gets the better of him, and John soon realizes that he is being beaten up by Chas himself.

Chas explains that he decided to go to work because his wife was talking too much. John offers to get out of Chas' business for his friend's sake, but Chas grabs him and demands to know whether John is getting involved with demons and things beyond his control again. John admits that this threat is only human, but he still worries too much about his friend's safety than to get him involved. When Chas insists on helping in some way, John suggests that he could procure him a gun.

Elsewhere, Samuel Morris, the Family Man, checks in at a local bookie to see if he can find any information on John Constantine's whereabouts. The proprietor doesn't know where he is, but another bookie knows he was seen leaving Eddie Morgan's shop. There, Morris encounters Chas, who professes no knowledge of John. However, Morris senses the lie, and gives Chas a beating.

After waiting in the park for quite some time, John meets his contact and purchases a gun. He feels uncomfortable with the weapon, knowing that he is not a man built for killing.

From a nearby barber shop, Morris watches as John returns to Chas' shop, and sees his friend in bandages. Chas grumpily complains he should have been warned that the killer was an old man. John tries to have Chas go home, but the man explains that his wife will have his head if she sees him in this state. He also passes John a postcard that the killer gave him. Looking at the card, John realizes that the Family Man has murdered his father. Desperately, he tries his father's number, but it is answered by his sister Cheryl. Sadly, John promises to come see her soon. After hanging up, he breaks down. John realizes that the Family Man will kill his sister as well, if he doesn't get to them first. Rather than use Chas' help, he decides that Chas' cousin Norma - a prostitute - might be just who he needs.

That night, they make a show of John being thrown out by Chas, and John makes his way to Norma's as the Family Man follows him. Norma welcomes John amiably, and after exchanging pleasantries, John explains that he hasn't come for her services - just someone to sleep with. He makes a show of setting his alarm for 6AM, knowing that the Family Man is eavesdropping.

Afterwards, Chas secretly follows the Family Man back to his own hotel, where he sets his own alarm for 5AM.

John stays up, gun in hand, and unable to sleep. Finally, Chas calls with the news that the Family Man intends to come an hour before John intends to wake. Afraid of what is to come, John wakes Norma, and informs her that he would like to take advantage of her services after all.

Retrieved from "https://heykidscomics.fandom.com/wiki/Hellblazer_Vol_1_29?oldid=1433535"
Community content is available under CC-BY-SA unless otherwise noted.