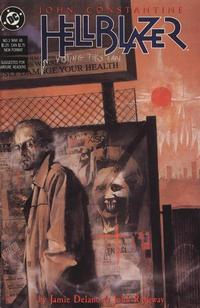 When it comes to arrogant parasites, I've got a short fuse. So look out, suckers, here comes the revolution!

Appearing in "Going for It"Edit

Synopsis for "Going for It"Edit

Roger Randall, a hip investor who recently made some bad decisions, jogs through the Spitalfields neighborhood of London, which is increasingly becoming a Yuppie neighbourhood. Though fear of failure spurs him on, he quickly finds himself outflanked by Rod and Bella, both of whom represent Roger's interests at Mammon Investments. As Roger struggles to keep up, they explain that Mammon won't carry his bad debts, and so they must activate their penalty clause. They grab him by the shoulders and force him to run faster and faster until his body fails, and he collapses in a pool of blood, with smoke rising from his running-shoes.

It's election day - November 11th, 1987 - and John Constantine has been tipped off to the unusual deaths of several yuppies like Roger Randall, and so he has come to Spitalfields. He had learned of these deaths while visiting the Serendipity junk shop operated by his friend, Ray Monde. Despite the strangeness of the deaths, John is more intrigued by the idea of yuppies in Spitalfields than anything else.

As it turns out, the demon Blathoxi, Lord of Flatulence, has been attempting to corner the soul market in the UK. The Conservatives are expected to win the election, and the time is right to press the haves and have-nots in order to boost the infernal dollar.

John explores the Spitalfields neighbourhoods, realizing that yuppies wouldn't move there unless there was some kind of profit to be made in making the poorer areas seem fashionable. In this case, the area isn't even desirable, so these particular yuppies must simply be taunting the poorer surroundings with their richness. Suddenly, he hears a horrible sound from inside one of the flats.

The sound is a CD bought by Rod and Bella, who are actually demons, unbeknownst to John. The pair of them are happy to be out of Hell, playing the UK soul market. They decide to go to a club called "The Pits" for the election party. John hides, spying on Rod and Bella as they leave. He follows them to The Pits, a wine bar. The patrons ignore him, and he thinks little of their boring conversation until he realizes that the lampshades are made of human skin. He assumes, then, that these yuppies have reached a level of excess that they have begun devil worship.

After tasting his drink, John does a spit-take, as it tastes terrible. He curses "Jesus Christ!", and the words manage to draw the attention of the entire bar. They close in on him, forcing his back up against the door, until a drunken floozy bursts through the door, and captures everyone's attention. She explains to Rod and Bella how she has lost everything and made a wreck of her life. Rod consoles her, but warns that their contract is binding, meaning that she must forfeit all intangibles in perpetuity - in other words, her soul. He gives her a spray of something down her throat, but instead of getting high, her head explodes. The assembled patrons applaud.

Finally cluing in as to the nature of his quarry, John leaps through a window and rushes to the nearest holy place - a Salvation Army Hostel. Running back to his apartment, John haphazardly makes a circle of protection and prepares to summon Blathoxi, banking on his connections rather than any kind of ritual sacrifice to get the demon's attention. Instead of Blathoxi, John is visited by the steward of the club at which Blathoxi spends his time. Grumpily, John follows the steward down to Hell to speak to the lord of flatulence.

Bluffing, Constantine claims that he has come to exchange his soul for Blathoxi's best offer of money. Blathoxi claims to pay the market rate, noting that the UK market is very buoyant given the prospect of a Conservative third term. Playing his bluff up, John comments that he expects that Blathoxi has seen the most recent opinion polls. This makes the demon suspicious, thinking that John must have some inside knowledge that makes him want to take profits on the eve of the election. He assumes that John thinks the left wing is going to win the election, causing the soul market to crash. As he has John thrown out, the demons of Hell begin selling their stock in the UK soul market frantically.

John is tossed back onto his floor, but the circle of protection proves shoddy enough that the demons who had been pursuing him are now surrounding him. They take him back to The Pits and hang him upside down in front of a television playing the election results. He expects that being forced to watch Margaret Thatcher speak is meant to be some kind of torture. The assembled demons are pleased, sure of the Tories' victory.

Suddenly, Blathoxi appears, and chastises the assembled yuppie demons for having invested all of his wealth into the UK Soul Market, when it is clearly dropping in value - all because of John's mere suggestion that it might. Angrily, he destroys his servants. Before leaving, he warns that he will get John Constantine's soul, one way or another.

John feels pretty good about his success, until he realizes that the Tories have won the election, and a third Conservative term is imminent.

Retrieved from "https://heykidscomics.fandom.com/wiki/Hellblazer_Vol_1_3?oldid=1433509"
Community content is available under CC-BY-SA unless otherwise noted.