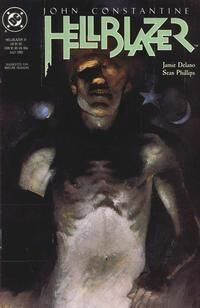 C'mon, Dad, cut this out, eh? I'm sorry, but it's done now. It's over. You're dead and cremated, mate. You're free -- you don't have to stay here anymore. Anyway, why take it out on the girl. If you want to haunt someone, haunt me. Where's your sense of humor, Pop? All sons kill their fathers, don't they say?

Appearing in "Mourning of the Magician"Edit

Synopsis for "Mourning of the Magician"Edit

While her family is gathered for Thomas Constantine's funeral, Gemma Masters is plagued by visions of her grandfather's corpse. At night, his cold fingers touch her, and he crawls into bed beside her, stealing her warmth. The experience terrifies her, and she knows that this is not just a vision - it is real.

She tries to remember the methods her uncle John had given her for dispelling bad dreams, but none of them work, because it is not a dream. She hopes that by the time of tomorrow's funeral, her grandfather will be lain to rest, and her uncle will be able to help her if he doesn't go away. Her parents, in the meantime, are of little help.

Gemma is disappointed that John is not at the funeral, and she can see her grandfather watching the proceedings, and it still bothers her. John, meanwhile, is outside. Funerals make him uncomfortable, and he still doesn't know how to say goodbye to his father when he feels responsible for his death. He peeks inside and sees how Gemma's father Tony has been living life as if he's in a coma since he quit the Resurrection Crusade. John's sister Cheryl is putting on a brave face, and Gemma looks very worn out. John dares not go in. Ever since Nergal, churches make his blood boil, quite literally.

John buys his way into the crematorium, to watch his father burn. Meanwhile, Gemma steps outside and into the car, feeling a little grumpy that John didn't show. Suddenly, she has a vision of flames, and senses that something bad is happening. Inside the crematorium, the flame jet burns through the coffin, drying the old man's skin and muscles until his body shoots up as if he has just wakened from a dream. The sight nearly causes John to soil himself, and he stumbles outside. Gemma, meanwhile, watches in horror as her grandfather's charred corpses runs out of the church, still haunting her.

That night, Gemma is kept awake by the knowledge that the black, oily remains of her grandfather are still standing in the darkened corners of her room. She gets up early, having slept very little, and hears her Uncle John and mother washing the dishes downstairs. John assures Cheryl that Gemma will be alright, but Cheryl is still shaken by the thought of someone wanting to murder an old man like their father. Gemma interrupts, and invites John for a walk. Knowing she needs to talk, he agrees.

John admits that while he cannot see his father, it doesn't mean that Gemma cannot. As he talks with her, John suddenly realizes why the spirit is hanging around. He asks Gemma to leave him alone with the spirit for a while.

John walks to the grave yard where his mother was buries, and begins to tell the spirit of how he and his father had not got along well - particularly since John's birth took his mother's life. But it wasn't until John's teen years, when his father decided to burn all of his son's occult books, that the rift grew wider. John had salvaged just one book, which bore a spell which would bring about a slow and painful death. Feeling vengeful, John used the corpse of a cat to cause his father to begin dying at an early age.

Eventually, though, John realized that he had taken things too far. He didn't want his father to die, after all. He desperately searched for a way to reverse the spell, but found nothing. So, in a last-ditch effort, he dug up the cat's corpse and embalmed it with formaldehyde, in order to keep it from decaying further. While it stopped his father from deteriorating, it did not reverse the effects. In order to keep the cat's corpse safe, John had buried it under his own mother's headstone.

Now, John understands that the best way to set his father free is to destroy that artifact, and give his father a proper funeral. Gemma comes up behind him as he digs up the cat's remains and sets fire to them. Together, they watch the last remnants of Thomas Constantine go up in smoke.

Retrieved from "https://heykidscomics.fandom.com/wiki/Hellblazer_Vol_1_31?oldid=1433537"
Community content is available under CC-BY-SA unless otherwise noted.