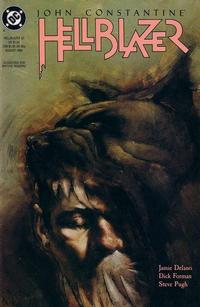 Somewhere in a London junk yard, Dougie drags the body of the junker out to be eaten by a some kind of monster. As Dougie turns to walk away, the creature orders him to return, and have a taste of the entrails.

While waiting for the bus, John Constantine happens to notice a pair of dogs fighting. One of them takes a submissive, supine position, and the other dog leaves it alone. Later, John calls up reporter Tony Baxter, who informs him that several drunks have gone missing recently, and their bones found at the back of a playground.

John heads to a shelter called Simon House, where the drunks were known to have stayed, and his acquaintance Mike explains that there had been a police presence for a while, but it died off. An Inspector Drummond would have kept them on the case, had he not recently killed himself. John decides to get involved, and hang around at a nearby pub to see what he hears.

After some time of waiting in the pub, John hears of a music video shoot going on at a local junk yard. However, the junker hasn't been heard from in some time, and though his assistant Dougie claims he is doing fine, his low intelligence suggests that he cannot necessarily be trusted. Hearing this, John asks directions to the junk yard, and leaves.

At the junk yard, a young man thinking he's going to have a part in the video becomes suspicious when Dougie leads him deeper into the yard, but there are no cameras or crew about. Soon, Dougie disappears, and the man is set upon by the creature.

John lets himself into the junk yard, and finds his way into the shack therein. Inside, he finds a biography - apparently written by an illiterate - of Inspector Drummond. Apparently, Drummond had not felt that he was recognized for the work he did as a copper, having been passed up for several promotions. He retired early, and took to occultism and magic. He killed himself as part of a ritual to transfer his soul to a younger body. Unfortunately, all of the bodies he encountered were inhabited by pure souls, and he could not take them.

John's reading is interrupted by Dougie, who - after some cajoling - reveals that the junker was eaten by Drummond. John soon finds himself surrounded by ravenous junk yard dogs. At their head is a great bulldog. This is the body that Drummond found. He drags out the remains of the young man who he had attacked earlier, and demonstrates what happens to those who have disappeared.

Drummond explains that the power he was seeking is now his. His strength and the ease with which he became the alpha dog are mere stepping stones to his plan for subjugating mankind to the canine.

Flippantly, John holds up a can of dog food and suggests that Drummond stick with the stuff that was made for him. Unfazed, Drummond orders John to throw the can as far as he can. He will have only the time it takes to reach its landing place before Drummond and his dogs attack.

John throws the can and rushes toward it. Drummond gives chase, and John tries to take refuge within a junked out car. This doesn't seem to do much good, so John tries climbing a mountain of junk, and hiding in it. Again, this is to no avail. He rushes off into the shack and covers himself in gasoline to mask his scent, pockets a pepper shaker, and turns on a radio in order to mask his sound. This allows him to sneak around Drummond long enough to get out into the open.

Remembering what he witnessed earlier, John adopts a supine position, and Drummond cannot attack him. Despite his once-human soul, Drummond cannot break from his own instinctual programming. When Drummond gets closer, John shakes pepper into the dog's face, and Drummond has a sneezing fit.

The fit lasts long enough for John to grab a nearby monkey wrench, and bring it down hard on the dog's head. John points out that the other dogs are beginning to see a shift in who the alpha is, as he beats Drummond over the head again and again. Drummond warns that when he is killed, he will come back as something else. John suggests that he shouldn't bother.

As John disposes of his gasoline-drenched coat, he sends the remaining dogs away. He muses that it was lucky that it was stupid dogs, and not something smarter.

Retrieved from "https://heykidscomics.fandom.com/wiki/Hellblazer_Vol_1_32?oldid=1433538"
Community content is available under CC-BY-SA unless otherwise noted.