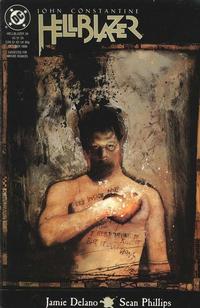 Don't try to catch me, Marj. I'll drag you down. Don't trust me. Don't let me taint you. Hah hah! It's a disease, you see. Riddled with it, I am -- caught it from something I dug up as a kid.

At night, Mercury senses something coming. She knew she and her mother Marj should have moved on from this place sooner. She peeks out the window, and sees something out there. Nervously, she wakes her mother as a banging comes on the door of their trailer. John Constantine calls out to them from outside, but Mercury warns her mother not to open the door to him. Marj can't resist.

John is obviously drunk, though Marj doesn't seem to mind. Mercury, on the other hand is disgusted, pointing out that John should know better than to get himself in such a state. She believes that he's poisoned himself somehow. She reaches into his mind enough to determine that whatever it was, it involved fathers and a gun. John blocks her out before she can see the rest. Coughing heavily, he wanders away.

Inside the trailer, Marj begs her daughter to let her take John in, reminding the girl that she loves him. Mercury warns that whatever is eating away at John is too big for Marj to handle right now. She's too vulnerable. John doesn't want to be close to anyone right now - he wants to hurt someone. Marj insists, so Mercury angrily grabs her blanket and announces that if Marj wants to let herself get hurt, she will not be there to watch.

Marj invites John inside, apologizing for Merc's behaviour. John admits that the girl was right, and that Marj should have turned him away. Marj leans over him and pours him some tea, and John can't help but stare at her exposed cleavage falling out of her robe.

John explains that he found them when he bumped into their mutual friend Errol at the Poll-Tax Riots in Trafalgar Square. Feeling somewhat suicidal, John had frozen in the middle of the road as the riot police van bore down on him. Errol pulled him away at the last second. Errol had only had time to tell John where Marj and Mercury were before the police charged.

John admits that he's lost something; his function, his reason to live. He begins rambling on in a depressed state, and Marj sternly grabs him up and tosses him into the shower. As she does, John has a vivid memory of his boyhood on the beach when he had been scrabbling around on the rocks and fallen into a crevice among the crabs and jellyfish. Marj turns on the water, and John regains some of his composure. Tugging on her robe, John begs her to make him warm. She rebuffs his advance, warning that the way he looks at her frightens her. John angrily responds that he has been trying to kill that frightening thing inside him, but it just won't die. It's that thing that drives him on to uncover the mysteries; those same mysteries that unleash every ghastliness on him. Collapsing on the bed, John warns that Marj should have listened to Mercury.

Mercury, meanwhile, begins gathering wood for a fire outside the van, wondering how John could have let himself become this old man looking for his own death. She wonders how adults can so easily be consumed by their tiny needs. She thought that when she, John, Marj, and Zed had raised up the female dragon, to shift the balance of the sexes - that they had washed away old, oppressive structures. But John and Marj had backslid. They had to let go of those old structures in order to keep going. Marj was too important to be corrupted or broken right now; too vulnerable. John had come in his crippled state and waved his broken self in the face of Marj's compassion. She knows that no matter how repulsive John may be right now, Marj will sleep with him, because she can't help but love him. No matter what, there will be nothing Mercury can do to stop John from hurting her mother.

In the van, John claims that the only thing to make him feel better would be to have sex. Marj responds that she won't do it just like that - he needs to open up to her. John opens up by ranting about all the ways in which the world is going to hell. There's too much to do, and nothing to be done about any of it. Marj tries to explain that just because he can't fix it all at once doesn't mean it's his fault. John claims that it is his fault. His fault, and the fault of all the other bogeymen. In everything he's done, he has been responsible for some kind of evil. He warns her not to trust him; not to be tainted by him.

Marj turns away, warning that she doesn't know who he is right now. She wanted to be close again, like they were, but he seems lost inside himself. He just seems to want to freak her out. Breaking down, John works his way into her arms, and just asks to be held.

Outside, Mercury can't help but overhear what's going on in the van. She tries to drown it out, but as her own mother gets sucked into John's life. And she realizes that she has been snared too - that she has been dragged into the drowning pool that is John's unconscious.

Retrieved from "https://heykidscomics.fandom.com/wiki/Hellblazer_Vol_1_34?oldid=1433540"
Community content is available under CC-BY-SA unless otherwise noted.