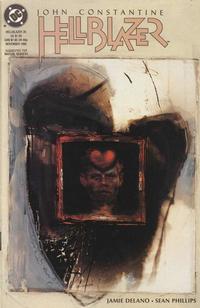 It's the awful, lonely secret of the dead-boy's heart-- and you must keep it to your grave. But the very worst thing is -- once you know it -- you're a bogeyman too.

As a boy, John Constantine and his sister Cheryl are staying with their Uncle Harry and Aunt Dolly while their father is away on business - at least, that's what John was told. John is curious and enjoys make-believing that he is on adventures as pirates or Indians.

One day, he catches his sister primping for a planned date with a local boy named Ron Simons, of whom their uncle Harry does not approve. Cheryl is quite infatuated, and she does her best to get John to shove off for a while so she can see Ron. Finally, with the offer of a shilling, a Mars Bar, and the threat of a bop on the head, Cheryl manages to get John to go outside for an hour.

Playing as an Indian brave, John investigates a quarry where it said that a Bogeyman lives, and drowns little boys. While there, he bumps into a group of young thugs, and asks to join their gang. The boys want little to do with a Scouse boy, whose father is in jail for stealing women's underthings. The boys claim that Uncle Harry had told their dad of what Thomas Constantine had done. Even so, John attempts to prove that he is a worthwhile addition to the gang, claiming to be a good scout. They demand, then, that he go down into the quarry and steal one of the Bogeyman's nudie books from the back without getting caught.

Determined, John manages to sneak down to the little cabin in the quarry undetected. He carefully takes just one of the magazines from the Bogeyman's stash, but then he hears the other boys' shouts for him to run. They have begun pelting the tin roof with rocks, and the Bogeyman is roused by the noise. John realizes he's been betrayed, and begins to run off with the magazine tucked into his shirt. He hides in the nearby woods as the haggard drunk who lives in the cabin shouts after him that he only wants to show the boy something.

Crawling away, deeper into the woods, John finds himself lying next to a collection of bones. He identifies a rib cage and hips, and believes that he has found the corpse of a dead boy; a victim of the Bogeyman. Inside the rib cage, he finds a red stone which he believes is the boy's fossilized heart. He grabs it, thinking it might have some kind of magical properties.

As he tries to wander out of the woods, John is surprised to find a couple of older teens engaged in heavy petting. When they spot him, the older boy gets angry and threatens him, but the girl thinks John's interest is cute, and suggests that they let him watch. Disturbed by the girl's attitude, John begins crying and runs back out to where the bullies who betrayed him are planning to burn a kitten they've found.

As the boys converge on John, they realize that he managed to keep one of the magazines, and they burn him with their cigarettes in order to make him drop it. When they make for to grab the dead boy's heart, John clocks one of the bullies over the head with it and runs away. The boys believe that John is crazy, so they let him go.

That night, John hurts from his burns and bruises. He presses the dead boy's heart against the burns, and imagines that it absorbs the pain from his body. He overhears his uncle Harry and aunt Dolly in their bedroom. It sounds as though Harry is a violent man, despite his puritanical leanings. John tries to ignore it, pressing the stone to his forehead until he falls asleep. He is awakened by the sound of a flushing toilet, and he sneaks out of bed to see. Aunt dolly is there, with her wrists strapped together with a belt. John considers helping her, bit worries that she would become cross with him.

The next morning, John wakes late and finds Aunt Dolly doing the dishes. Cheryl has gone out to do the shopping. John asks whether his father really is in jail for stealing women's underthings, and Dolly is forced to admit that it is true - but it is something he may not understand for some time.

Later, John is playing in the garden while Cheryl hangs the washing up on the line. She notices that he has built something like a castle out of jars, and imagines that it might be a home for a prince or princess. John points out that the jars are full of insects, and it is a prison. He demonstrates how he treats escapees; crushing them with the dead boy's heart. Cheryl comments that John is disgusting, and demands that he let them go. Slyly, John responds that he will tell Uncle Harry that she took her knickers down in front of Ron Simon for money. Cheryl shouts that she hates him and runs off.

Frustrated and angry, John smashes the prison he built with the stone, and accidentally cuts his finger. He squeezes out the blood onto the stone. Eventually, John decides that the stone is making him do bad things, and thinks he needs to get rid of it.

John returns to the quarry and tries to throw it back to where it came from. His aim is short, and the stone hits the tin roof of the cabin. Horrified, John expects the sound to alert the Bogeyman, but the man doesn't come out. John realizes that the stone must have smashed through the roof and killed the Bogeyman in his sleep. In terror, he runs home.

John considers that once he knows that now that he knows the secret of the dead boy's heart, he too has become a bogeyman.

Retrieved from "https://heykidscomics.fandom.com/wiki/Hellblazer_Vol_1_35?oldid=1433541"
Community content is available under CC-BY-SA unless otherwise noted.