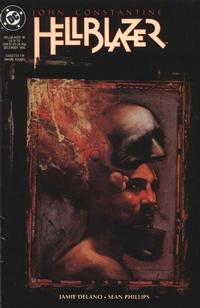 You need a broader experience to understand what makes people who they are -- how the patterns of the past inform the future.

Appearing in "The Undiscovered Country..."Edit

Synopsis for "The Undiscovered Country..."Edit

In the early morning Mercury peeks in through the window of her mother's van to see whether John Constantine and Marj are done having sex. She had warned her mother not to do it, but it was almost inevitable. Something inside John's damaged soul had demanded it, and Marj's loneliness and love for him required that she give it to him. Meanwhile, Mercury had taken a glance into John's unconscious, and she didn't like what she saw.

John wakes and gets dressed, looking outside for Mercury. When he finds her, he tries to convince her to come inside, but she'll have none of his faux-cheeriness. She knows that he is suppressing his emotions. He tries to explain that she is too young to fully understand how the patterns of the past shape the future. Angrily, she retorts that it is those patterns that messed him up. He feels guilt at the bodies that have been stacking up since he was born. From his mother and twin brother's death when he was born to how he drew his friends to their doom by his carelessness, to how he had indirectly caused his own father's death and then succumbed to a petty need for revenge.

Mercury explains that it's not anyone in particular that scares John. It is the future. He's running from Hell towards a sea he hasn't learned to swim in. He is paralyzed by his fear of death and Hell's revenge. Mercury explains that Hell does not exist - it is what you make it. She offers to prove this by taking John into his own psyche - to make him face his own fear.

Without warning, she pulls John into his astral form and they traverse the landscape of his subconscious. There, they come to a set of doors, each painted with a different version of the tarot's death card. John chooses the door he most identifies with, and Mercury shoves him through it without her.

Passing through the door, John transforms into his 80-year-old self. He has been staying at a place called Greenhill, where his rebellious ways and insistence on smoking have made him unfit to stay there any longer. His integration counsellor informs him that he must either leave Greenhill or accept an organized death. Rather than die, John chooses to leave. He expects Mercury to come for him, but he encounters a group of hellhounds. His fear of being taken to hell leads him to fall over a bridge and into the river below. He begins to drown in the water.

Meanwhile, Marj is throwing a tarot reading for John. She discovers while he seeks to be a wise man, he has an underlying desire for unsymbolic sex. The devil seems to have a stranglehold over him. She is startled by a call from Mercury for help. She runs outside to find that John has stopped breathing. Mercury claims that she didn't mean to do this as her mother pushes her aside and begins attempting to resuscitate him.

When John comes to, he doesn't give Mercury a chance to explain herself. He simply gathers she and her mother in his arms and leads them inside, saying that one should never tackle a postmortem before breakfast.

Retrieved from "https://heykidscomics.fandom.com/wiki/Hellblazer_Vol_1_36?oldid=1433542"
Community content is available under CC-BY-SA unless otherwise noted.