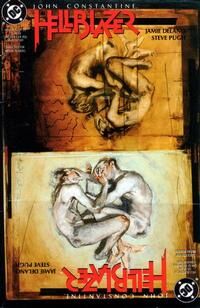 Yes, it's the truth. Incontrovertible -- you know it is. You killed him, murdered him in your dead mother's womb. You killed the Golden Boy, the Magus -- Killed the best part of yourself. You're as guilty as original sin. Condemned and hanged for it -- over and over again.

Appearing in "The Hanged Man"Edit

Synopsis for "The Hanged Man"Edit

Marj has reassembled the family she had created for herself some time ago. She, Mercury, and John Constantine have joined Errol and Zed at a camp near the ocean. Still, she senses that something will soon change for the worse. John will run away - she knows it. But the winds of change are destined to blow harder if John leaves the family again. She begs him to stay and let them love him, but he warns that he is too afraid to let himself. Something about this place fills him with dread - like his destiny is tied to the location, somehow. He hopes that Zed's magic can help him get to the bottom of what's been niggling at him.

As he and Marj walk across the beach together, John suddenly has a vision of someone he calls the Golden Boy. He explains that when he was a boy, he had seen this shining boy at his mother's grave. At first, he loved the boy and wanted to be friends, but soon the boy's glow seemed to be emphasizing everything about John that was flawed and disappointing. He grew to hate the golden boy and resent him, feeling that his father Thomas loved the Golden Boy more than he, even if the boy wasn't real. John thinks that that golden boy could have become real, somehow, if he'd let him.

John has Zed throw his Tarot. The first card represents who he is now, the second represents what stands between him and who he is meant to become, which is represented by the third card. John first pulls the Hanged Man, then the Tower, then the Magus. Zed has him focus on the first card until its imagery begins to resonate with him. John envisions the moment of his birth, as he was born frail and sickly. His mother had died giving birth to him; her placenta had hemorrhaged. The doctors were surprised to find another infant inside her. This one - a healthy specimen - had somehow died, leaving the runty John to survive. When Thomas Constantine had been brought in and told of his wife and son's death, he spurned John and called him a thing of evil.

John comes to suddenly, with the simple truth ringing in his mind: he had killed his brother. That brother would have become the Magus. That brother is now the Golden Boy. Everything that has happened since has stemmed from that original sin. He has been repeatedly hanged as punishment for that first act of murder.

John and Errol head toward a ruined tower on a nearby cliff. Errol has brought a bag filled with nearly five hundred psychedelic mushrooms, and John quickly devours them all, explaining that he needs to get outside of his own head. Leaving Errol nearby, John heads toward the tower, and though the mushrooms kick in, he pushes himself through his hallucinations to get inside it.

John passes under an arch, which represents his mother's birth canal. Inside, he finds a narrow tunnel and has to remove his clothes to pass through it. On the other side is a pool of water, which John dives into, thinking of it as a womb. He becomes his foetal self, seeing his unborn brother, shining beside him. The twin's goodness radiates, and again, John is filled with jealousy. He grabs the boy's umbilical cord, wrapping it around his own leg, with the intent of starving his brother to death. Suddenly, he remembers that he can't allow things to turn out the way they did originally. He unwraps the cord and steps back, allowing his brother to become the magus he was meant to be.

The next morning, Errol seeks John in the caves below the tower, and finds only his clothes.

Retrieved from "https://heykidscomics.fandom.com/wiki/Hellblazer_Vol_1_39?oldid=1433545"
Community content is available under CC-BY-SA unless otherwise noted.