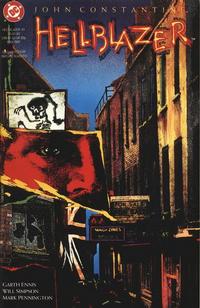 I'm the one who steps from the shadows, all trenchcoat and cigarette and arrogance, ready to deal with the madness. Oh, I've got it all sewn up. I can save you. If it takes the last drop of your blood, I'll drive your demons away. I'll kick them in the bollocks and spit on them when they're down, and then I'll be gone back into the darkness, leaving only a nod and a wink and a wisecrack. I walk my path alone... who would want to walk with me?

Since the events of the autumn, when he believes he and his unborn twin brother may have merged together into one man, John Constantine has laid low. It's been nearly six months, and he managed to avoid getting into any crazy messes with demons, or witchcraft, or murderers. Even so, he has just found out some very upsetting news. He is dying.

The other night, he had woke up coughing, and what had come out was something more than phlegm or even blood. He had coughed up a part of himself. Yesterday, Doctor Ellis, had come forth with the test results showing that John suffers from lung cancer, and it is most definitely terminal. Crestfallen, John had left, but even knowing the cause of his ailment, he found relaxation in another pack of silk cuts.

That night, John dreamed of his own death; the sound of the coffin being nailed shut, and the absolute darkness. He dreamed that Astra Logue had dragged him out of that darkness and into the afterlife, where his friends waited for him. This was not a pleasant reunion, as John felt responsible for each of their deaths. When he realized they weren't haunting him anymore, but that he had died and come to them, they turned on him and tore him to pieces.

This morning, John decided to do some investigating. He had his friend Mark, a doctor, show him the cancer ward of his hospital, under the pretenses that he was checking it out for his sick aunt. The place didn't give John the hope he was seeking. He didn't want to become like these old men who were slowly fading away all around. Before he could escape, John was called to by a man named Matt who begged for a cigarette. John decided to be honest about his own condition, and explained that he had come to see what it was like for himself, and not his aunt. Matt was conciliatory, and they became fast friends. Before leaving, John promised to visit again, though he knew there was little time left for either of them.

After returning home, John received a phone call from Doctor Ellis. He hoped beyond hope that the doctor would have found some result showing that the cancer wasn't terminal, but Ellis had merely been fascinated by the irregularity in John's blood caused by the demon Nergal's taint. John slammed down the receiver angrily, disgusted that his quack of a doctor had wanted to study his blood's properties. He worried about what might happen when he was dying of cancer with Matt while the doctor gave his blood to the military, and explored its destructive properties. He would not let that happen.

John has since spent nearly two hours in Frank's Cafe, and ordered nothing but one cup of tea, which has gone cold. Angrily, Frank throws him out of the cafe, and John must find somewhere else to mope. He promises himself that he will try any harebrained scheme to cheat death, no matter how remote a chance it provides. Despite all of the options open to him, John inwardly senses that he will fail. John Constantine is going to die.

Retrieved from "https://heykidscomics.fandom.com/wiki/Hellblazer_Vol_1_41?oldid=1433547"
Community content is available under CC-BY-SA unless otherwise noted.