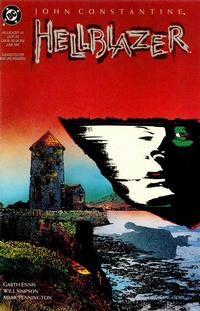 I pinned all my hopes on Brendan, and I'm sure he did the same thing with me and what a waste of time it all turned out as. And thank Christ we did it, because I'm pissed and happy and I'm with my mate. Thank bloody Christ.

John Constantine is on the ferry from Holyhead to Dún Laoghaire, Ireland in the hopes of reuniting with his old friend Brendan Finn. However, he is becoming seasick, and the pint he ordered isn't helping. When a man sits across from him with a plate full of greasy food, John can't take it anymore, and he vomits over the side of the boat. Before leaving the ferry John gets revenge by slashing the man's tires.

John hitches a ride to Killiney, where Brendan lives in a tower. Brendan greets John enthusiastically, but John can see that his friend is ill. Brendan has always been a heavy drinker, known for his enthusiasm for fine spirits. The old friends catch up, as neither has seen the other since 1983. Since then, most of John's old crew has been killed. Brendan's girlfriend Kit, meanwhile, left him because he drank too much.

Brendan reveals that he has something to show John, and leads him down into the wine cellar. John doesn't fully appreciate the value of wine, and Brendan explains that the way that magic is something of a religion for John is how he feels about this wine, despite his own occasional dabbling in magic.

Deeper in the cellar, Brendan explains that he found a cave not long ago, and something quite extraordinary lay inside. There is a spring of water, which Brendan believes was once blessed by Saint Patrick himself. John confirms that the spring is holy water. He is surprised when he sees Brendan fiddling with a pentacle. Brendan jokes that if Jesus could turn water into wine, he could turn water into beer. John is incredulous, but the magically produced beer that begins flowing in the spring is the best pint he's ever had.

The two have several pints of the magic beer, and get quite drunk. Finally John turns to Brendan to talk about his reason for coming. He has come hoping that his friend could help him cure his lung cancer. Hearing this, Brendan bursts out laughing, and explains that he had wanted to ask John for help in curing his liver disease. As it turns out, neither can help the other. Brendan is sure that he will die by the end of the night, and he asks John to have just one more pint with him before he passes. As his friend dies, John heads back upstairs, but he hears a knock at the door.

On the front step stands Satan himself, there to collect Brendan's soul. He explains that he once made a deal for the soul in exchange for the chance to amass a vast collection of fine wines. Casually, Satan mentions that John's friends and his father Thomas are all in Hell. This makes John angry, and he vows to save Brendan's soul.

Satan mentions that one stipulation of the deal is that he must collect Brendan's soul before the strike of Midnight, otherwise he will go to Heaven instead. This gives John an idea. Before he will let Satan claim the soul, he offers a toast, using the magic beer that Brendan made. Satan drinks of it with some intrigue, until John explains that it was made with holy water. He knocks over the table with the pentacle on it, and the beer is turned back into holy water, making Satan retch and convulse. John throws a bottle of holy water that was once wine over Satan, and the demon's skin burns and blisters. Finally, the demon collapses into the spring of holy water and disappears.

John checks his watch, noticing that midnight has passed. He has saved Brendan's soul. He wonders, though, what kind of vengeance Satan will have waiting for him when he dies. If he feared death before, John now fears it even more. He needs to find some way to cure his cancer, or he will have to face whatever horrors await him in Hell.

Retrieved from "https://heykidscomics.fandom.com/wiki/Hellblazer_Vol_1_42?oldid=1433548"
Community content is available under CC-BY-SA unless otherwise noted.