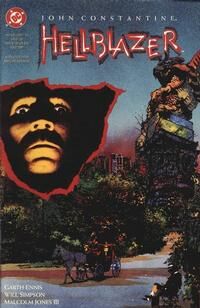 Oh I see. There's some twat sitting somewhere with a pair of scales is there? Measuring good and evil in ounces? That's your problem mate. The whole bloody lot of you just wander about like a pack of wankers, seeing everything in black and white.

John Constantine drifts off on a bench while waiting for someone. He is startled awake by Ellie, who is a full fifty minutes late. She accepts his coffee and offers him a sandwich, warning that his smoking isn't going to do him much good just now. She comments that her boss is quite annoyed at his John's recent deception. All of the anger that he has built up for Aeons of being cheated by saints and martyrs; it will be unleashed on John, when he dies. Naturally, despite owing him a favour, Ellie can't do anything to help him. All that's left is to appeal to one more person - the Snob.

Before that, though, John keeps his promise to Matt at the cancer ward by visiting. John explains that the reason he hasn't checked himself in there too is that he is so determined to live that he is willing to try anything - and he is busy looking for that anything. Matt tells the story of how he had come to be in the ward. When he was told that he had to stop drinking and smoking, he decided to accelerate the process by binge drinking and chain smoking. The result was a physical breakdown which landed him in the hospital, and he hasn't been out since.

John uses magic to worm his way into the Snob's club, knowing his appearance alone would prevent his entry, not to mention his identity. On his way in, he passes Charlie Patterson, who had been talking with the Snob. John happens to know something of Patterson's past and warns that the Snob would not be pleased to know it. John forces his way into the Snob's presence and finally demands to know why he is faced with cancer and condemnation. Gabriel - the Snob - responds simply that John has cancer because he has smoked thirty cigarettes a day since he was seventeen, and he is going to hell because of all of the evil he has done. He takes some pleasure in reminding John of all of his failings.

John becomes angry, and marvels at how black and white it seems to be for people like Gabriel - as though someone is measuring out good and evil acts by ounces. He feels that his good acts have some merit, while Gabriel states that John's evil acts have outweighed his good ones. He orders John to leave, but pauses to hear John explain that Charlie Patterson - with whom he was just speaking - is not the good man he seems to be. He suggests that if God knew what kind of people Gabriel was associating with, he might not approve.

Three hours later, John is in the bar, and nothing has come of his trip to see the Snob. He orders a few drinks and considers his options. He realizes that he has been approaching this issue all wrong. In the past, it has been self-reliance that helped him most. Why not now? He forms a plan that is so crazy and sneaky that it just might work.

Retrieved from "https://heykidscomics.fandom.com/wiki/Hellblazer_Vol_1_43?oldid=1433549"
Community content is available under CC-BY-SA unless otherwise noted.