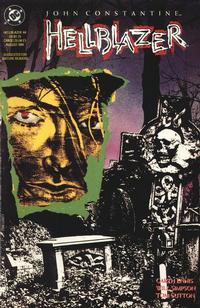 Can you see me now, all you friends I've lost and betrayed? Do you wish me well, then, or are you praying I'll be with you soon? Will you relish every scream when my blood starts hitting the floor, or will you turn away, afraid to look, the moment you've been waiting for too awful to look at, even for my sins? Sit back and enjoy the show.

Appearing in "Dangerous Habits (Part IV of VI) - My Way"Edit

Synopsis for "Dangerous Habits (Part IV of VI) - My Way"Edit

John Constantine visits his mother and father's plot in the grave yard outside Liverpool before reluctantly heading to his sister Cheryl's, where he plans to say his final goodbye. He knows that he won't last the night. The lung cancer is going to get the better of him, and barring a miracle, he is going straight to Hell.

John tries to play off his appearance to Cheryl as a simple flu, though his pallor is severely pale. Sadly, Cheryl comments that she wishes he would come around more, because her daughter Gemma needs an uncle lately. Awkwardly, John states that Gemma will have to find someone else to look up to, as he will not be coming back. Unaware of his cancer, Cheryl assumes that whatever he's talking about has to do with his job; the magic. He's in over his head, and she always knew it would end this way. They embrace, and John says his goodbye through his tears, asking his sister to tell Gemma goodbye for him.

John returns to London, where he is met by Chas Chandler. Chas has had to change his cab out for a tiny compact car, on account of his having lost the old cab on a bet he placed under John's advice. John is apologetic, until Chas reveals that he had to go to Mike Adams for a loan in order to afford this car. John warns that Mike Adams is crazy, and could very well kill Chas if he can't pay up. Angrily, Chas shouts that he wouldn't have had to go to Mike Adams if John hadn't nearly bankrupted him. John becomes upset, and gets out of the car, saying he'll walk the rest of the way. After John has gone, Chas discovers a letter on the passenger seat for him from John. Along with some money to square his debts, the letter apologizes for all the times John used his friend and put him in harm's way. It explains that he will not be coming back from what he now faces, and he is glad they could part as friends. The irony is not lost on Chas, and he weeps for his friend.

At John's apartment, he knows he will not make it through the night. It's going to happen tonight. He makes some calls and memorizes the spells he will need to use. He collects his tools and then makes one last stop before dying.

He visits his friend Matthew Higgins at the cancer ward. Despite his heavy mood, John can't help but laugh at all of Matt's stories. Even so, he is glad to have had a good time with him. Finally, John admits that he has come to say goodbye, though he won't say much about it. He will not be coming back to see Matt. Determined, Matt struggles out of bed and to his feet, having promised himself that he would say goodbye like a man. They shake hands and say goodbye.

John chooses his old flat in Paddington as his place to die, feeling a slight nostalgia. He uses chalk to draw a pentacle and lights fresh candles. Standing in the middle of the circle, he calls on the second of the three fallen angels who lead Hell. He offers the demon a deal, which, after some deliberation, the demon accepts. Afterward, John waits a few minutes, and then erases the pentacle and disposes of the candles. It would be bad if the next demon knew he had spoken to the first.

John redraws the pentacle and lights fresh candles. He calls on the third of the fallen, and offers a deal, which is accepted. By this point, John's cancer is making him very weak, and his encounter with the last demon didn't help. It won't be long now. Feeling a bit sorry for himself, John shuffles through his coat and retrieves a bottle of his friend Brendan Finn's whiskey. As he drinks it, he says a thank you, an I'm sorry, and a goodbye to everyone he was ever close to.

Finally, he produces a razor blade, and prepares to call on the first of the fallen - Satan. With a cry, he slits his wrist, and lets the blood pour out. As John feels his life draining away, by suicide or cancer, he senses Satan watching him. Grumpily, John challenges the demon to wait until he is actually dead before coming for him. Satan smiles and explains that he has come early so that he can watch.

Retrieved from "https://heykidscomics.fandom.com/wiki/Hellblazer_Vol_1_44?oldid=1433550"
Community content is available under CC-BY-SA unless otherwise noted.