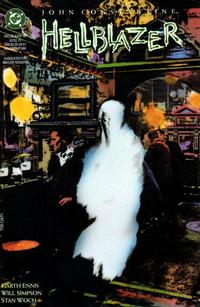 I mean, I'm going to be forty in a couple of years. I can't go on pissing about with magic and stuff forever. Might be time I wised up a bit...

Appearing in "The Pub Where I Was Born"Edit

Synopsis for "The Pub Where I Was Born"Edit

Freddie and Laura Collins were married years ago, when he was the manager of the Northampton pub in Camden. When he died, she continued to manage it for many years. Now, the Northhampton is John Constantine's favourite pub, and he has plans to visit it later with Kit and Chas Chandler.

Kit has been helping John deal with his feelings after being cured of cancer, and watching his friend Matt Higgins die of the same disease not long after. John has since been having romantic feelings for her, but he worries about ruining one of the few honest friendships he has - not to mention the fact that she was once in a relationship with his late friend Brendan.

John spends the day in the park feeding birds and thinking about what it means for him to grow old. Maybe it's time he gave up magic, considering how much trouble it's got him into. He marvels that he managed to go the whole day without a cigarette.

At the pub, John plays poker with Chas and his coworkers Martin and David. Naturally, John cleans the three of them out, but Martin and David remain good-natured. Rumour has it that the Northampton is up for sale, and that Laura will be ousted soon. The buyer has sent a man named Joe Hollis after her to convince her to give up the place without a fight, and he seems to have gone quite insane after having had his genitals burnt off when he pissed onto the third rail of a tube track.

John and Kit have several drinks until he practically passes out. Kit can handle her liquor far better, and drags him out on her shoulder with Laura seeing them off safely. Since his death, Laura has been visited by the spirit of her husband, and now, he is beginning to sense that her safety might be at risk. He warns her to get out before Joe Hollis and his people torch the pub and kill her.

Not long after, Joe Hollis and his men do break into the pub and set it ablaze. After being knocked out, Laura comes to when the fire has already enveloped most of the pub. Finally giving up her stubbornness, she makes for the door, only to be caught in the backdraft, and burned alive. Her husband's spirit urges her to let go, but her death and the destruction of the Northampton are only the beginning of something awful.

Retrieved from "https://heykidscomics.fandom.com/wiki/Hellblazer_Vol_1_47?oldid=1433553"
Community content is available under CC-BY-SA unless otherwise noted.