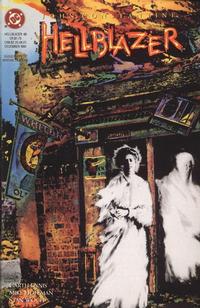 I shouldn't go looking for trouble anymore. I should... fall in love with a beautiful Irish woman and work tirelessly to get her into bed... heh...

Amid the flames that are burning the Northampton Arms pub to the ground, the spirit of Laura Collins looks at her burnt body and realizes that she has been murdered. Her husband Freddie's spirit welcomes and comforts her. Their pub and their love have been burned, and they demand justice.

In the morning, John Constantine wakes on Kit Ryan's couch, having been altogether too drunk to get himself home, in any case. Last night, Kit had dragged him to her flat, as hers was closer than his, and the cabby helped lug him up the stairs and tossed him on the couch. She appears, having just got out of the shower, and offers John the chance to use it while she makes breakfast. Emerging from the shower, John is welcomed by the smell of Irish soda breads, a rare breakfast hearkening back to their days together with Kit's old boyfriend Brendan Finn.

After Kit leaves for work, John takes some lunch at a local diner. He starts to wonder if he ought to give up his old way of life - maybe settle down with Kit, if he she'll have him. He is surprised by the sudden appearance of Chas Chandler who seems quite distressed. Chas explains that the Northampton pub went up in flames overnight, and their friend Laura Collins, the manager, likely died inside. John realizes that even if he gives up seeking trouble, trouble will find him.

They check out the rubble of the Northampton, and John determines that this was likely an insurance job by Mr. Carson. When John implies that he's going to get involved, Chas becomes apprehensive. John admits that things are going to get ugly, and urges his friend to go home. The policeman at the scene isn't much help to him, but John can sense an emotional presence in the rubble. It is a feeling of something that was once good, now gone bad.

John spends his day following around a stool-pigeon name Lenny Fisher, and then leans on him for information about Joe Hollis' cronies. After some cajoling, Lenny gives up Del Carter and Tony McKay.

Del and Tony are holed up together watching television, because Joe told them to lay low for a while. Suddenly, Del gets a headache, and stops talking. He silently stands up, grabs a shotgun, and blows out Tony's brains. John hears the double-barrel firing, and rushes into the apartment, only to find Del shoving a shard of broken glass up through his neck and deep into his brain. Horrified, John runs away.

John tries to drink away the images from his head, but he is interrupted by one of Hollis' remaining thugs, who has learnt from Lenny that John was looking for Del and Tony, and assumes that John killed them. The thug is more than a match for John, but he is saved when Kit arrives, and proves her mettle by gripping the attacker by the bollocks and squeezing him into submission. John demands to know where Hollis is, and the thug admits that he is likely with Mr. Carson trying to force a man named Quincy into keeping silent about what happened last night.

Meanwhile, Hollis' tales of remorseless cruelty are enough to put a tear in Quincy's eye, and Carson is satisfied that his co-conspirator will stay silent. Suddenly, though, Joe Hollis begins talking to someone who is not in the room. It appears as though he is being possessed by Laura Collins. Unable to control his own body, Joe advances on Carson, and rips through the man's gut with his bear hands, tearing out his innards. He then stuffs the flesh and organs down his throat until he suffocates on them.

John arrives in time to see Quincy standing immobile near the bodies of the men who involved him in murder. He senses the same presence he felt when he was at the rubble of the Northampton Arms. He realizes that the presence is Laura, and when she realizes that he is there, Laura reaches out to him. She and Freddie had been trying to get revenge, since the pub was burnt down. Along with the pub went the symbol of her love with Freddie.

John explains that if they don't stop this, they will find themselves in Hell, and it is not a nice place, so far as he knows. Carter and Hollis turned their love into hate, but they must not kill Quincy too, or it will be one too many. John tries to convince them that Quincy's money can pay for a whole new Northampton Arms, just like the first pub. They allow him to give it a try, and with some relief, John warns Quincy that they will first clean up the bodies, and then Quincy will pay for the pub's rebuilding - or else.

With the plan solidified, Laura and Freddie give up their quest for revenge and pass on. Kit finds John outside, and walks him home.

Retrieved from "https://heykidscomics.fandom.com/wiki/Hellblazer_Vol_1_48?oldid=1433554"
Community content is available under CC-BY-SA unless otherwise noted.