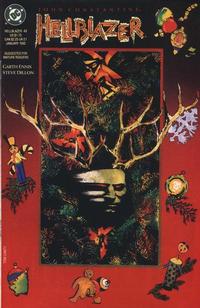 It's not easy with Kit. I can't just ask her out, 'cause she makes me feel like some spotty bastard teenager. I need her to know for certain, right before the very first kiss... And I'm being followed by a ghost, which doesn't exactly help matters.

Appearing in "Lord of the Dance"Edit

Synopsis for "Lord of the Dance"Edit

John has spent much of the day wandering Camden looking for the perfect Christmas present for Kit Ryan; one that will show her how he feels about her, and hopefully convince her that he's worth a look as a lover. Unfortunately, nothing seems to be suitable, and to top it off, he's being followed by a ghost.

John can tell that this particular ghost is pretty miserable. He surprises the ghost, and asks whether he's sad because he doesn't like Christmas. The ghost admits that he actually doesn't like Christmas, and invites John to go for a cup of tea to talk, given that he hasn't met someone sensitive to ghosts in quite some time.

The ghost explains that his dislike for Christmas is directly related to the old carol "Lord of the Dance." The carol was once a pagan carol, but in the 60s, it was appropriated by a christian, who altered the lyrics to make it seem as though the titular lord was Jesus Christ. The reason he knows this is that he was once the Lord of the Dance.

Long before the Christian missionaries came, the people of Great Britain celebrated the winter solstice with a great feast. They would affirm their lives by dancing, singing, drinking, and screwing - and none could deter them. Hearing this, he would come to them as Lord of the Dance, and they would all sing his song and make merry.

This was until the Christian monks came. They saw how the pagans celebrated, and declared it against the teachings of their god. They taught the pagans Christmas, and so, instead of celebrating in the alehouse, they prayed in mass. The Lord of the Dance could do nothing but watch as his people turned away from him, and as such, he turned away from them. Even then, the Christian monks could not let him be. They rewrote history so that he had never been. He became the Ghost of Christmas Never.

Hearing the story, John feels sympathy. He comments that the ghost might be being too pessimistic, and leads him to a nearby pub. They meet up with Chas Chandler there, and order some drinks. They get quite drunk, and tell stories and sing, until the pub stops serving, and Chas can barely stand. John explains that the spirit that the ghost was missing has always been there. After all, once you're drunk, you don't care if it's Christmas.

John and the ghost drag Chas back to his grumpy wife, and then the ghost takes his leave, thankful that John showed him that he still has a place in the hearts of men.

When John gets back to Kit's flat, he realizes that after all that, he forgot to get her a present. He apologizes profusely, only to discover that she didn't get him anything either. As she considers what she can give him, she warns that he should never leave her alone on Christmas again. Then, yanking him by his tie, she kisses him for the first time.

Retrieved from "https://heykidscomics.fandom.com/wiki/Hellblazer_Vol_1_49?oldid=1492793"
Community content is available under CC-BY-SA unless otherwise noted.