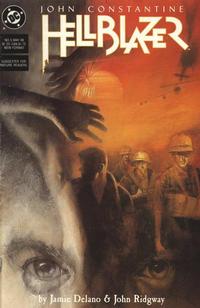 Christ, what a bloody awful mess!

August 10th, 1968, Vietnam
Lt. Frank Ross and his childhood friend Craig Anders of the United States Marines comb through the thick jungle on the lookout for North Vietnamese soldiers. Ross expects an ambush, and finally it comes. It is Anders who finally breaks their own silence in firing back.

August 10th, 1987, Liberty, Iowa
Old Willy Anders hangs a banner across the road in Libery, Iowa welcoming back the town's sons who have been at war. The Resurrection Crusaders have come to Liberty and the townsfolk are convinced that their Pyramid of Prayers will bring their lost sons back to them. After finishing with hanging the banner, Willy turns around and sees his son Craig standing against what appears to be the backdrop of a war-torn Vietnamese village. Craig opens fire.

In Vietnam, Craig and Frank stand over the old man they have killed, and rush on before the actual VC comes along and kills them. Still Craig is shaken, because for a second, the man he shot looked just like his father. On further investigation, the body is obviously that of an elderly Vietnamese man.

In 1987, Frank Ross runs the gas station in Liberty. The heat of the summer tends to bring back memories of his time in Vietnam. His flashbacks are worse this year than in others, because the Resurrection Crusaders have got the townsfolk riled up. Not to mention the fact that the townsfolk don't like him, given that he came back from the war, and their sons didn't. He also managed to make a living out of the Interstate, while their farms suffered. Even heavy drinking can't keep him from his dreams.

After hearing about the presence of the Resurrection Crusaders in Liberty, John Constantine makes a stop there on his way to check on the Swamp Thing. It's hot, and he fancies getting himself a drink, but when he enters Frank Ross' store, he finds that he's wandered into the middle of one of Frank's Vietnam flashbacks, and the former marine fires his weapon at him. Fortunately, Frank's wife Nancy appears and helps him to calm down. As it turns out, Nancy is Craig's sister, and daughter of the recently deceased Willy Anders. Despite his best efforts, John can't help overhearing the woman's comments about the town's troubles, and he is drawn into their private lives.

Hoping that she will feel obliged to him, John asks Nancy to take him in to Liberty, and find him a hotel there. The hotel is owned by her mother. On the way, she explains that the townspeople have come under the influence of a religious group intent on preying on the townspeople's faith that Frank Ross' compatriots in his platoon would return after being declared Missing In Action. On arriving in the little town, John realizes that something strange is about to happen, but that whatever it is, he may not be able to stop it.

That night, John overhears Nancy arguing with her mother about the Crusaders' promises. The old woman is convinced that her son Craig will return home in time to see his father buried. Nancy responds that the span of twenty years that the boys have been missing is too long - they're never coming back. Angrily, Mrs. Anders slaps her daughter across the face, calling her a slut, and condemning her for living on the interstate with Frank, the only boy who did return.

Waking from yet another flashback, Frank Ross is overcome by the feeling that what the Resurrection Crusaders promise is true: the other boys are out there, somewhere. They're waiting for him, and as he straps his guns on, he slips out into the corn field, ready to fall upon his target. He becomes engrossed in a memory of a planned assault on a suspect hamlet. What appears to him like a Vietnamese grass hut is the very hotel at which John Constantine is staying, the 'Welcome Home' banner hanging overhead.

Meanwhile, the elderly townspeople have gathered to watch a television broadcast of a representative of the Resurrection Crusaders. John watches with the feeling of impending doom hovering over him. On this night, the townspeople have used the Pyramid of Prayer to get their prayers for the return of their lost sons elevated to the point that they will be broadcast globally on this program. Looking out the window, John sees Frank Ross approaching with his guns, and sneaks out the back door.

As Frank opens fire in the hotel, he imagines that he is rushing the suspect hamlet back in Vietnam. As John leaves the room, Frank imagines him as a young VC soldier making his escape, but suddenly a young woman ruins his aim, so he slaps her across the face. The woman is in fact Nancy, but she appears as just another Vietnamese villager to Frank as he and the ghost soldiers threaten the elderly townspeople with their weapons. The mothers and fathers are horrified to see that the sons they brought back with their prayer have brought the war back with them. Frank Ross shoots down Mrs. Anders, and orders his men to move their prisoners out while he takes care of something behind, still gripping Nancy in his arm.

Alone and in the dark, Frank Ross, possessed by his memories, envisions his own wife as a captive Vietnamese woman. He channels his bloodlust and violence into sexual energy, and he rapes her while John watches from the shadows, thinking he should do something. He watches as Nancy struggles to get away, and later returns with her own gun, prepared to kill her husband. Frank still sees her as the Vietnamese girl, though. Nancy shoots him in the leg, and in his anger, Frank fires his assault rifle in her face at point blank range.

Frank rejoins his platoon, and imagines seeing American fire-bombers overhead. Suddenly, his vision begins to fade, and he finds himself alone in Liberty. He stumbles over the corpse of his wife, and realizes that his platoon has come and gone, leaving him behind once again. Anguished, he shouts out to the sky that he should have been taken too. John Constantine steps out of the corn field and, taking the tone of a drill sergeant, he orders Frank Ross to pick up his weapon and return to his unit.

Frank Ross disappears into the corn field, and John follows at a distance, knowing that this cannot end well. A truck begins approaching on the interstate, while the ghost marines hold the elderly villagers at gunpoint. Frank steps out into the middle of the road and begins firing blindly into the headlights of the truck. The result is that the truck skids and rolls into the gas station's pumps, causing an explosion which kills everybody. John determines that whatever brought all this about, he must get on the Resurrection Crusaders' case soon.

Retrieved from "https://heykidscomics.fandom.com/wiki/Hellblazer_Vol_1_5?oldid=1433511"
Community content is available under CC-BY-SA unless otherwise noted.