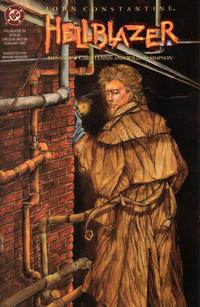 The rest of them might be content to spend their time fighting the Crimson Dongbiter or whoever, but I wanted to do something worthwhile.

John Constantine and Kit Ryan have been in bed with each other for nearly three days before John even bothers to get up. He just intends to be away for a moment, but the sight he sees in the bathroom forces him to announce that he'll have to go out for a while. Someone has filled the sink with the carcasses of dead birds, and written "Hampstead Heath" on the mirror in blood. John cleans up the mess as discreetly as he can before putting on his jacket and heading out to the park.

Not long after arriving, John begins noticing supernatural creatures in the shadows, and the remnants of his bravado fade away. He is led by the creatures to a grove where the King of Vampires sits. John knows about the King of Vampires. He had existed before even mankind, and his first human prey had, in fact, been the first man. John Constantine, however, has a much less arcane origin.

The birds in the sink were something of an over-dramatic invitation to meet. The King of Vampires includes John among the more fantastic and bizarre of creatures. As much as John may claim to be an ordinary man being dragged all too often into supernatural adventures, there is something extraordinary about him. John, however, considers himself completely different from his costumed contemporaries such as Doctor Fate and Baron Winters.

While the costumed magicians that John despises always seem to come out on top, John can barely keep his life together, with every consecutive encounter. While they might be content to fight with super villains, John would rather focus his attention on worthwhile endeavours. Even with every legitimate attempt to do good, somebody else suffers as a result of his efforts.

After the incident at Newcastle with Astra, John was thrown into Ravenscar Secure Hospital, where he was believed to have murdered the girl. The orderlies had beaten him cruelly every night, and John had hated them only because they would not put him out of his misery. The King of Vampires had found a bounty for himself in the dead of the Battle of the Somme during World War I. Each body was as a cask of wine, waiting to be drunk dry.

John begins to think that it's time his host got to the point, but the King of Vampires is distracted by the news that they are being spied on. To John's horror, the vampire captures a curious night watchman and rips open his skull, draining him of his blood and spinal fluid. John cringes as he hears the sounds of the King's slurping. He is sure that whatever the King of Vampires has called him for, it will be bad news.

Despite the bad times for John Constantine, there were good ones as well. He spent long, happy hours with his friends Brendan Finn and Kit Ryan in Dublin. Brendan was the finest man John knew, and Kit was the most beautiful and kind woman. The King of Vampires, meanwhile, rules underground, and his agelessness is a double-edged sword.

Finally, the vampire has his fill and explains that despite all his claims to be an average Joe, dragged into the world of the mysterious, John Constantine is one of the most intelligent, able, and daring occult figures that ever lived. That is why the King of Vampires wants John to work for him. He wants John to spy on the other occultists - to give him a heads up; they would never expect it from him. John continues to profess that he is not special, but the King of Vampires reminds of how John tricked Satan and the other rulers of Hell. Now, Satan simply sits on his throne thinking up new ways to torture his deceiver.

Years from now, in the future, the King of Vampires will be at the top of the food chain, master of all he surveys, having outlived every being on earth.

The King of Vampires claims that he and John have a lot in common, but John won't buy it. The vampire suggests that he would allow John to know first hand what it is like to be like him, but John is even more repulsed. He explains that the creature has him all wrong. He's not a mystery man pretending to be normal, he's a normal man pretending to be mysterious. John's spurn for the offer angers the King of Vampires, who offers a deal: If John can explain why it is better to be him than to be a vampire, he will be allowed to live.

John responds that the King of Vampires cannot go for a walk in the park and hear the birds sing in the morning. He can't kiss a girl and know that she loves. He can't go out and get drunk with his friends. He can't sit for another hour, and wait for the sun to rise. Enraged, the vampire concedes defeat. As John walks away, the vampire warns that actions like this are going to lead him down a path he doesn't like. If he doesn't get John, someone else will.

John returns to the street, and considers that he might like to spend another three days in bed with Kit.

Retrieved from "https://heykidscomics.fandom.com/wiki/Hellblazer_Vol_1_50?oldid=1521018"
Community content is available under CC-BY-SA unless otherwise noted.