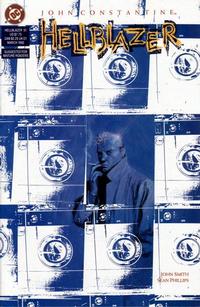 I think I'm going round the twist. For a second there I almost had meself believing 'em. This bloody place must be getting to me. It's so real, it's unreal.

Appearing in "Counting To Ten"Edit

Synopsis for "Counting To Ten"Edit

John Constantine was surprised this morning when his old school friend Jerry Monaghan burst into his living room claiming to be possessed. John managed to get the demon out, but in the process, Jerry shat himself. Now, John has to wash Jerry's close for him at the laundrette, and the prospect of spending his day in there is less than pleasing.

John curses Jerry for making him wait around in this laundrette with such a low class of misanthrope. However, Jerry is of a rare breed - a friend, and John's running low on those. Friends, lovers; they all seem to leave him, eventually. Maybe the mystique of a man like him wears off after a while.

While he sits reading the paper, John is interrupted by an elderly woman who offers a penny for his thoughts. Her companion comments that she hasn't seen him around, and John responds that he was just looking for a change of scenery. The woman points out that he reminds her of Columbo, with his long coat. Humouring them, John asks why the ladies are hanging about in the laundrette. They explain that they come there every night, because they used to work there. There were four of them, but their friend Florrie died.

As they explain that Florrie had lost her independence after breaking her leg and moving into her son's flat, their companion Joan scans out the window. Florrie had killed herself by leaping off the balcony. In fact, they come every night because they are waiting for Florrie's ghost to appear. Florrie is usually the first of them to arrive, in fact, but Joan has seen no sign of her.

As the clock strikes ten, John has a brief moment where he nearly believes the ladies' story. Then things start becoming uncomfortable, and he suffers a panic attack. As he pulls himself together, someone calls him over to the phone, claiming that a call's come for him. When he picks up, a strange voice begins reciting apocalyptic poetry; whispering John Constantine's doom. The voice challenges him as to who he's hiding from at the laundrette. Rather than listen anymore, John hangs up.

John considers whether he was hiding from Jerry. Jerry is something of an occult masochist. The exorcism John performed on him would have gone peachy if it hadn't been for the fact that Jerry had more than one demon inside of him. In fact, he had closer to seventy demons inside him; the fix of having so many demons clamouring for control of his mind and body a thrill he could not pass up. Jerry was a junkie, if nothing else. So, John had left him to suffer with the rest of his demons. John refuses to think about what might be going on if Jerry hasn't sorted his possessions out for himself.

Grumpily, John comments that Florrie doesn't appear to have shown up yet, and it's past ten. However, a strange atmosphere is going. A dog comes in, and aggressively starts sniffing at Phyllis' crotch, and next door, the window of a butcher shop is smashed. The ladies explain that that is Florrie making herself 'presentable'. John grows more and more anxious, thinking that if he could just get to the pub across the street, everything would be fine. It wouldn't matter if there's a walking dead woman next door.

John manages to leave, but he peers into the window of the butcher shop, and sees something unpleasant. Florrie makes her way into the laundrette, and her friends welcome her, and promise that together, they will show her son what's for. Outside, John vomits in the street.

Retrieved from "https://heykidscomics.fandom.com/wiki/Hellblazer_Vol_1_51?oldid=1433557"
Community content is available under CC-BY-SA unless otherwise noted.