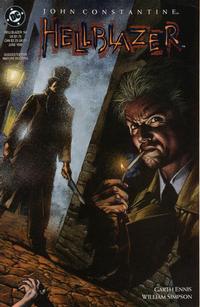 It'll be bloody lethal if we screw it up. We'll end up with our bollocks ripped off. Make no mistake about it.

The prince is still struggling to remember who he is, much to the annoyance of the parasitic demon Calabraxis, who has been forcing him to kill for days. The human's body cannot contain all of the flesh he has eaten, and Calabraxis expresses disdain for the weak species, noting that he had faced the same lack of endurance on the part of his previous host in Whitechapel, years ago.

Meanwhile, John Constantine sits down for a drink with the medium Nigel Archer. He explains that he has learned that the Free Masons had summoned Calabraxis to possess Sir William Gull in order to facilitate the campaign to cover up Prince Albert's impregnation of a young common girl named Annie Elizabeth Crook. Nigel naturally wants to go to the papers with the information in order to bring down the government, but John puts him off it.

Calibraxis is growing annoyed with his host. The prince has ripped out his own fingernails and knocked out his own teeth in order to impede his ability to kill and eat victims. He will not give up in trying to find out who he is. Though he cannot access his own memory, the demon's are open to him. He sees back to the previous night's séance. He fails to recognize two of the assembled, though he senses that Calibraxis knows one of them. The other four are familiar, but he can only remember one of their names: Marston. He remembers where he was, and who he is. Before he can do anything about it, the demon resumes control, and smashes his head against a wall.

Later, John returns to Kit Ryan's flat with suitcase in hand. He reminds her that he's moving in, and she playfully yanks open the suitcase and begins rifling through it. Her demeanour sours when she discovers a piece of parchment hidden among his clothes. John admits that the paper is related to his dealings in occultism, but he promises that none of that will come home with him. Reluctantly, she sets her outrage aside, and they retire to the bedroom.

The page happens to be from the Grimorum Verum, a book John got from Ben Cox that explains how to trap, bind, summon, and exorcise demons of all kinds. All he has is the exprcism and banishing page, but there is more, somewhere. He hopes to that he can use it to get rid of Calabraxis without resulting in his horrible bloody death at the hands of the angered demon.

Meanwhile, Sir Peter Marston meets with David Hezlet secretly, knowing that John likely does not plan to keep quiet once the killings have stopped. Despite this, they need the occultist to help stop the killings, because they simply cannot go on. However, once the killings stop, Constantine will no longer be required. Marston outfits David with a pistol, to that end. Soon, they are visited by John and Nigel, and Marston admits that two more victims have been found since yesterday. John promises that he can stop the killings, though he may not bother to keep the prince alive.

The demon has grown fed up, and he decides that it is time to bring an end to John Constantine. He knows, of course, that John Constantine's death would cause havoc in Hell. Calibraxis, however, does not care. He and his host head for the Caligula club, where he begins killing without discrimination.

The commotion outside calls Marston away, and John takes the opportunity to search his desk. He discovers that Marston also has a copy of the pages from the Grimoire Verum - only he has more of it than John does. John deduces that Marston had something to do with the summoning of the demon. Suddenly, he hears a bloodcurdling scream, and rushes out into the hallway.

The gory scene that he finds is more of a shock than John expected, and within mere moments, the possessed prince leaps on him. The prince buries his teeth into John's flesh, and he falls unconscious.

Retrieved from "https://heykidscomics.fandom.com/wiki/Hellblazer_Vol_1_54?oldid=1433560"
Community content is available under CC-BY-SA unless otherwise noted.