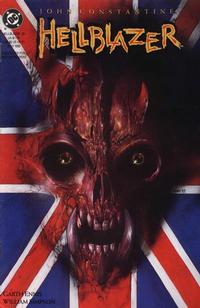 You're talking about putting the thing that used to be Jack the Ripper in charge of us? The bastard eats people, you headcase!

John Constantine regains consciousness, having been attacked by the possessed Prince of Wales. David Hezlet has bandaged his wounds, and saved John's life by using the very weapon he had intended to kill John with to subdue the prince. Sir Peter Marston suggests that he and John retire to his office while Hezlet takes care of some secret business. When John questions him, Marston angrily warns that he will destroy Constantine if he even attempts to tell anyone what he knows about the case.

Meanwhile, Hezlet sneaks off to find the Elliott twins, who were also at the séance of the previous night. Holly has given up speaking, since that night, but Hezlet shoots both of them dead, assuring that there will be no witnesses.

In Marston's office, John correctly assumes the nature of Hezlet's task. Marston orders John to begin the exorcism ritual immediately while he speaks to Hezlet. In Marston's absence, Nigel Archer and John try to figure out how they will avoid being murdered too, once the demon is dealt with. Given the evidence he found in Marston's office, John is sure that he is the one who summoned Calabraxis and bound him to the prince. However, he can't figure out why. In any case, Marston is obviously trying to use John to clean up his mess. So, John decides to do what he always ends up doing: screw them before they screw him.

Having spotted the possessed prince's younger brother in one of the rooms at the Caligula club, John tracks him down and knocks him unconscious with a fire extinguisher. Rifling through the royal's desk, he retrieves a pair of handcuffs, owing their discovery to the fact that the younger prince is involved in BDSM. Before he can do what he needs to do, though, John needs to know why Marston did it. He returns to Marston's office, and demands to know why the man intended to put a demon on the throne of England. Marston explains that the demon was meant to become a king who would rule absolutely. There would be no parliament and no opposition. No radicals or liberals. No thinkers and no immigrants. There would only be rulers and the ruled.

John is disdainful at Marston's folly. The man actually believed he could control Calabraxis, the devil's butcher. Regardless of the fact that Marston will have him killed once this is over with, John agrees to remove the demon - if only to keep a blade demon from running loose on earth. This, despite knowing that once Calabraxis is gone, Marston will simply try to find a replacement.

John and Nigel pin the possessed prince to an arcane circle, with John secretly tossing aside any doubts he might have had about the punishment he intends to visit on Marston. When Marston enters the room, John begins the ritual, and calls on the demon to leave the prince's body. In a hail of gore, the demon leaps up from the prince's throat. Marston shouts for John to send the creature to hell, but instead, John chains him to a pipe with the handcuffs he pilfered earlier. Righteously, John points at Marston, and calmly directs the demon Calabraxis to enter him.

At first, the demon is confused by John's actions. Once he is inside Marston, the plan becomes clear. Because he is chained to the pipe, he cannot use Marston to kill anyone else in the room. However, he can still get one last meal from his host. The demon begins causing Marston to tear at his own flesh with his teeth. As the three remaining men look on while Marston begins eating his own genitals, Hezlet points his gun at John and orders him to make the horror stop.

Fortunately, John can plainly see that the weapon's chamber is empty. Hezlet forgot to reload after killing the witnesses. John quickly unleashes a beating on Hezlet, disorienting the man enough that he can launch his body toward the demon, and offer it another meal. Hezlet's body is merely a distraction, though. The demon wants John Constantine. He begins trying to gnaw through the chained arm, only to find that his teeth cannot break through the bone. Reluctantly, he returns to mangling Hezlet's corpse.

Feeling sorry for forcing Nigel to watch all this, John offers to get some air with him. Looking in on the unconscious prince's body, John decides to let him lie there, knowing that if they kill him they will end up being on the run for some time.

Later, Sir Peter Marston wakes naked, hanging from a meat hook. He calls out, unsure of where he is. Nearby, another man hanging from another hook responds that he is Sir William Whithey Gull, the man thought to have been Jack the Ripper - and known by John Constantine to have been the last host of Calabraxis. The demon laughs, knowing that Lucifer will dine on Marston's soul tonight.

Retrieved from "https://heykidscomics.fandom.com/wiki/Hellblazer_Vol_1_55?oldid=1433561"
Community content is available under CC-BY-SA unless otherwise noted.