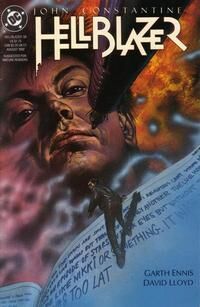 You'd better stay here, Danny... 'Cos if you try to get out of this house tonight, I'll kill you.

Appearing in "This is the Diary of Danny Drake"Edit

Synopsis for "This is the Diary of Danny Drake"Edit

While riding the tube, John Constantine overhears a man who suddenly has an outburst claiming to be a whore monger. Though John ignores him, his attention is caught when he hears the man mention a grimorum. After the man forces his way off of the train, John tracks him down and demands to know about the book the man has, sure that it was some variant of Ben Cox's Grimorum Verum - a compendium of spells and information for summoning demons.

The young man introduces himself as Danny Drake, and takes John to his house. There, Danny claims that he is being haunted by his diary. He had been keeping the diary for nearly ten years, writing down even his most secret thoughts. His wife Daphne had left him on account of his whore mongering, as he had stated on the tube. Since then, he met a woman named Ophelia, who had made him very happy. She would listen to his thoughts, and after a while, he felt like he didn't need the diaries anymore - so he burned them. Unfortunately, Ophelia left him soon after. Then, he started having these strange experiences. He would be on the phone, and suddenly blurt out a dark secret. He would turn himself in to police for things he could have got away with. The only people who knew those things were him and the diary.

John isn't sure that Danny isn't just going mad, so he presses the young man further. Danny admits, eventually, that his financial success in the 80s wasn't the result of savvy business. He had got into black magic and occultism at university. Ten years ago, he had sold his soul to a demon named Triskele in exchange for wealth. Disappointed to hear that Danny has fallen for the oldest trick a demon has, John departs to research Triskele in his own copy of the Grimorum.

John's occult books have to be kept in Chas Chandler's lock-up, because Kit won't let him keep it in her flat. In reading about Triskele, he discovers that she is especially violent and intimidating. Reading further, he discovers something that makes him very annoyed. He bursts into Danny's place and demands to know why the man isn't already in Hell. It is well documented that Triskele takes the souls of her contracts within five years, so he must have done something to prevent it. After some prodding, Danny admits that he had actually killed his pregnant wife - she hadn't left him - and offered their unborn child in exchange for another five years. Disgusted, John pushes his way into the cellar, where he finds that Danny has kidnapped someone's baby from Covent Garden because tonight, Triskele is coming back for him. John takes the baby into his arms and warns that if Danny tries to escape his fate tonight, he will kill him.

John returns the baby to the police and has a drink with Chas, knowing full well that Danny's soul is being claimed by Triskele, finally.

Retrieved from "https://heykidscomics.fandom.com/wiki/Hellblazer_Vol_1_56?oldid=1433562"
Community content is available under CC-BY-SA unless otherwise noted.