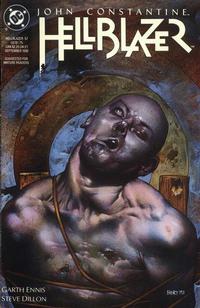 No I won't hold on! That's my uncle's body the friggers've nicked! Now maybe you still think I'm a tosser who'll never amount to anything, but I want me own back!

John Constantine and his friend Chas Chandler are having a fine time of things. Chas has hit upon the idea of donating sperm at ten pounds a cup. John thinks this is silly, but he is beginning to appreciate moments like these more and more. The pair of them are on their way to visit Chas' uncle Tom, of whom he is quite fond. Unfortunately, when they arrive, they find that uncle Tom has died of a heart-attack. Their good mood suddenly yanked away from them, John and Chas spend the afternoon drinking. Sadly, Chas asks John whether his uncle is in a better place, and John can only say yes.

John attends the funeral to support his friend, but he and Chas are filled with righteous indignation when they discover that a group of men are trying to steal uncle Tom's corpse from his grave. overcome with emotion, Chas rushes at them, and John has no choice but to brace himself for a punch-up. Chas gets his hands on one of the men long enough to force out the fact that they are being paid to take the bodies to a facility in Stokesley. Unfortunately, they let their guard down, and John and Chas are eventually knocked unconscious.

Kit Ryan opens her flat door to see John and Chas in quite rough shape. She scolds them for getting into a fight without her there to rescue them. She makes them some tea, and they tell her their story. Stokesley is up north, and Chas insists on coming with John to suss this out. He wants the chance to do right by his uncle. This is personal for him. Kit encourages John to let Chas come, and reluctantly, he allows it.

Elsewhere, a Dr. Amis drills one of his men to determine the facts of the encounter they had with John and Chas. When he discovers that the location of their facility was revealed, he docks their pay. Amis has been having fresh corpses stolen from graveyards in order to test ballistics, and he takes a gruesome delight in seeing the bodies torn to shreds by the weapons.

John and Chas head to Stokesley, having discovered from a nearby shop that the facility up the road was once a government owned research centre that provided the locals with jobs. Last year, though, it was bought up by a private company, and all of the local jobs were cut. It seems as though this is the place they're looking for. To get into the facility, they have to hike up a nearby hill, which is rather tiring for two men of their age - especially given their bruises. Over the top of the hill, they spot the facility, but they are unsure of how to get in until a van comes up the road.

John and Chas rush the van, and sneak into the open back of one. However, they become curious about the cargo, and realize too late that they have jumped into the back of a truck full of corpses. In disgust, Chas leaps back out and is caught by armed facility guards. John is forced to surrender as well. From his office, Dr. Amis watches, and is pelased to have found two living subjects to perform tests on.

Retrieved from "https://heykidscomics.fandom.com/wiki/Hellblazer_Vol_1_57?oldid=1433563"
Community content is available under CC-BY-SA unless otherwise noted.