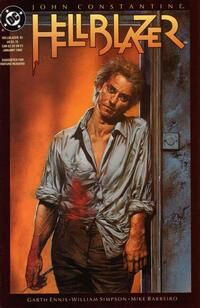 Shit...! Forgot to give him the finger.

Appearing in "She's Buying a Stairway to Heaven"Edit

Synopsis for "She's Buying a Stairway to Heaven"Edit

John Constantine is happy with his girlfriend Kit Ryan. The succubus Chantinelle knows this. Since the day John helped her, and her angelic lover Tali was slain by his own kind, she has been alone. They had known when they first knew that Ellie had become pregnant that the forces of both Heaven and Hell would not rest until both they and their child was dead. Finally, they had resolved that they could never return to their respective homes, and they turned to John Constantine for help.

In the meantime, the First of the Fallen tires of listening to Triskele's conversation, as he tries to find Chantinelle - a succubus under Triskele's charge - in his looking-pool.

John, meanwhile purchases some stolen surgical instruments with something disturbing in mind. He catches up to Ellie at the local bar as she wonders what his intentions are. While he may help her, she is sure he will ask her to help him in return by aiding him in taking on Hell itself. John sits down next to her and explains that he has found a way to help her - but she won't like it at all.

Triskele tries to dissuade the First from pursuing the succubus so persistently, but he knows that Ellie is with Constantine - and the man could use her. John knows that the First will one day get around the bargain that was made, and he is planning for it. Finally, after three hours, the First finds Ellie, and orders Triskele to accompany him in retrieving her.

The demons appear at the same house where the cursed birth of Ellie's child had happened several years ago. There is blood all over the crumbling, abandoned building. John steps outside for a cigarette, covered in more blood. The demons accost him, and John merely smirks at them. The demons are confused as to why there is blood everywhere, and why they can't find Chantinelle there, despite having sensed her presence. John explains that the blood is the result of his having carved a masking sigil onto Ellie's very soul. This feat had only ever been accomplished before by Judas Iscariot. John has accomplished it now, and Ellie will never be found by the demons.

This counts as John's third victory against the First; a hat-trick. According to the laws, John ought to be free now. Angrily, the first prepares to strike John down, but he is reminded that the bargain they made long ago prevents it. John teases the demon, promising that their confrontation will come soon. The demon leaves in anger, and John remembers with some regret that he forgot to give him the finger.

Elsewhere, Ellie marvels at the lack of scar, despite all of the hacking and cutting John had done to her. She muses that John is difficult for her to understand. Sometimes, he's an open book, but other times, he seems far more complex. Realizing that if she ever returns to hell, the sigil will destroy her, Ellie tries to acclimatize to the earth, walking through the park. As she sits on a bench, a young boy walks up to her and tells her that she is very pretty. She thinks on that, and decides that maybe earth won't be so bad.

John interrupts, and finally fills her in on his plan to fight the demons. The plan is very elaborate, and it seems insane, but she agrees.

In Hell, the First has punished Triskele. He sits and plans his revenge on Constantine. He is interrupted by Agony and Ecstasy who appear to warn him that he is bound to let John go free after having been beaten three times. In response, the First tears them to pieces and returns to his planning.

Retrieved from "https://heykidscomics.fandom.com/wiki/Hellblazer_Vol_1_61?oldid=1433567"
Community content is available under CC-BY-SA unless otherwise noted.