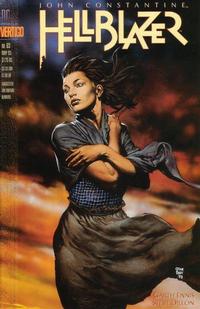 Nice one, Schwarzenegger. Been giving it a bit extra on the five-knuckle shuffle, have we?

Gabriel sees Julie again, and like before, she has difficulty understanding how a grown man could be so beholden to his father; so fearful. Of course, she doesn't know that he is in fact the archangel Gabriel, and his father is God himself. She encourages him to be more free with himself, and unburden himself of guilt for something he can't even articulate.

Meanwhile, Kit Ryan's friend Claire is trying to convince her to return to Ireland with John Constantine, but he is attached to London, and she would stay for him. She thinks she hears him on the stairs, and ends her phone call, but when the door opens, she is greeted by Charlie Patterson's thugs instead. When she realizes their intention to kill her, she steels herself, and warns them to leave before she attacks them. They laugh off her threats, and advance on her. The larger of the two thugs corners her in the kitchen, and after she gives him his last chance warning, she reaches into the sink and lunges at him with a knife. Then, she darts out into the living room and scratches the other man across the face, making her escape out the door. The smaller man regains his composure and calls on his companion to go after her, but realizes that Kit had thrust a knife into the man's groin.

The men report back to Charlie, who upon hearing what happened agrees that they should let her go and shift focus to direct confrontation with John Constantine. He has one of his men arrange for a car and a group of thugs to that end. Recalling what happened to the more unfortunate of the two thugs, Charlie cups his genitals and shudders.

Elsewhere, John meets with his friend Dez Foster, who is concerned about the increasing volatility of race war in his area. An organization called the National Front is essentially spreading Nazi attitudes, though they deny any racism in official documentation. Dez' own mother has been receiving notes wrapped in dog shit, warning her to go back to Africa. This sort of thing has got Dez' brother George really wound up, and he could get himself into trouble if he tries to retaliate. John suggests that he will try to suss out a lead on this with Charlie Patterson, but his words are cut short by a club over the back of his head.

Patterson's thugs begin kicking and beating John on the ground, and Dez tries to stop them. However, as they are Patterson's men, they are not fans of people of Dez' race, and one man whose nose he breaks decides to respond by taking a box-cutter to his face. Patterson orders them to put both men into the back of his car, and they drive away.

Meanwhile, Kit is hiding out at the Green Man pub, calling Chas Chandler, hoping he knows where John might be. She has him tell John where she is, if he turns up, because she needs to see him right away. Chas wonders if she's in trouble, but she claims she's alright. As she hangs up, she spots one of the thugs' blood spattered on the back of her hand, and the weight of what just happened to her sinks into her stomach. She thought she could pull her ice-woman routine and be done with it, but it is not to be. She rushes to the ladies' room to vomit.

John wakes tied to a chair in one of Patterson's darkened rooms. Charlie tries to pull his hard-man routine, but John's verbal jabs get the better of him. Slyly, Patterson uses his ace in the hole, and has them bring in Dez. He warns that John should have just stayed away from the archangel as he has them remove the bag from Dez' head. John is horrified to see Dez' face shredded and hanging off in swaths after being sliced numerous times with the box-cutter. His lips are torn and hanging off of his jaws, his eyes black, and all he can muster are weak moans. John screams as Patterson leaves him alone with his mutilated friend.

George Foster, meanwhile, stops by the pub to see whether his older brother has turned up. Apparently he was last seen taking a drink with John Constantine. The bartender mutters under his breath that John Constantine is bad news, recalling how many of John's old friends have died violently. Hearing this, George uses the phone to call a thuggish type who can get him a gun.

Gabriel and Julie walk through the park, looking to all observers like a pair of lovers - and Gabriel can see why. Julie, as far as he is concerned, is the perfect specimen of human goodness, and he is drawn to her for that. She comments that the cherry trees in the park always look so beautiful in spring, because of their blossoms. She is always happy in spring when she sees that. Thinking that no harm can come of it, Gabriel causes the trees to blossom there for her, and she is so filled with joy that she kisses him, and he kisses her back - he feels no guilt.

John dreams of walking on a windy shore - so windy that he can barely stand upright. From the beach, he spots a woman on the pier, and approaches. She turns with a melancholy stare, and John recognizes her as Kit. Suddenly John wakes, still tied to the chair, and realizes that Kit must be in danger.

Retrieved from "https://heykidscomics.fandom.com/wiki/Hellblazer_Vol_1_65?oldid=1433571"
Community content is available under CC-BY-SA unless otherwise noted.