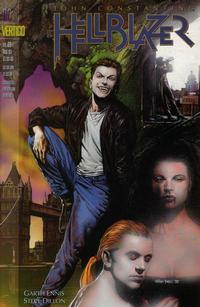 Appearing in "Down All the Days"Edit

Synopsis for "Down All the Days"Edit

After losing the love of his life in Kit Ryan, as well as his best friend Chas Chandler, John Constantine turned to drink. His alcoholism has since sent him into a downward spiral, and he has been living on the street since the summer.

Meanwhile, the King of the Vampires has taken to feeding on the vagrants of London. His lover Darius is especially sexually violent and debaucherous. They decide to take a trip out, kidnapping a young man and tying him up on the roof of a building. While they wait for their friend Mary, the King of Vampires muses about what might have happened to John Constantine since their last encounter. In retrospect, he should have left the man alone. He had not understood him then. He had told John at the time that great things were beginning, but he had not revealed that it was John's work is the cause of those things. Hell is in chaos, and no one dares tell the First of the Fallen that his hate for Constantine will be his undoing. Finally, Mary arrives, and she, Darius, and the King feed on their captive, and have an orgy of blood.

John manages to find himself a dirty hole to take up residence in, only to see that someone else has thought that he would take the same place for his self. The young man is amiable enough, proposing that they share the space. His new room mate steps out for a moment, giving John time to reflect on why and how he came to be in this situation. Whenever he sobers up, his head fills with the thoughts he was drinking to forget. If he had only made different choices, he could have been something else; something better. Instead, he will wallow in this shit - he'd prefer to.

The young man returns and offers his blanket to share. John accepts, but refuses to share any of his drink. The young man explains that he could use the drink, as he has just been prostituting himself, and his last patron was particularly violent. After the man had had his way with him, he brought out a giant Alsatian, and he had decided to run rather than find out what role the dog would play. Unfortunately, that meant he didn't get paid. The boy introduces himself as Davy, and John introduces himself. They bond a little, and realizing that his troubles aren't as bad as Davy's, John eventually agrees to share his bottle.

Elsewhere, a homeless man named Billy meets a large Alsatian dog in his alley, and decides that he will befriend it. He falls asleep, failing to notice that Alsation transforming into the King of Vampires before feasting on his body. His hunger sated, the King of Vampires happens to spot John Constantine and Davy together, and grins malevolently.

Retrieved from "https://heykidscomics.fandom.com/wiki/Hellblazer_Vol_1_68?oldid=1433574"
Community content is available under CC-BY-SA unless otherwise noted.