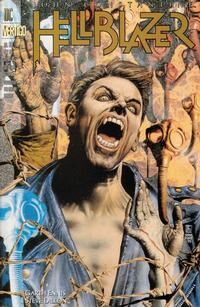 The King of Vampires looks on the sleeping John Constantine and recalls when he tasted his first Constantine. It was John's grandfather William, who had somehow managed to avoid the usual darkness that chases the Constantine family. It was 1916, and William had found himself the last surviving member of his platoon, apart from a Ken Wilson, who still lived, though his legs had been blown off, and he would soon bleed out. A compassionate man, William searched for a flask of water for Ken, but on his return, he found the man missing, and instead, there stood the King of Vampires, dressed in the garb of the opposing German forces. It had only taken about five seconds for William to bleed out, and the King of Vampires to satisfy his hunger.

John Constantine has fallen into such squalor that he now lives on the streets, an alcoholic, sharing a mattress with a rent-boy named Davy. He wakes with a start and a growl, and Davy explains that he couldn't sleep, because he feels ill. He decides to go for a walk, and John decides to join him, hoping there'll be some drink in it for him. Davy considers moving back to Sheffield, but John reminds that there won't be much work up there either. Suddenly, Davy cries out, as the pain in his neck has grown stronger, and he is beginning to feel weak. John asks to take a look, and upon spying the bleeding holes in the boy's neck, John tears his coat off for a better look. Davy's shirt is soaked in blood under his jacket, and before John's eyes, the blood begins spurting violently from his neck, and he collapses in death.

The King of Vampires steps out of the shadows to gloat. Though it is close to sunrise, he cannot resist this opportunity. Mockingly, the vampire reports that Davy had AIDS, gleefully hoping that John had slept with him. Seeing John in this state, he uses the man's words against him, pointing out that the joys of real life are beyond the mortal's reach, now. The problem with humans, he says, is their fear. That fear leads man to kill man, and as every man leaches the blood of the planet, it will die, and humans will be driven underground, just to find the vampires waiting.

The King of Vampires offers John the choice to become a vampire, but John would rather take death - especially in his current state. The vampire thrusts his fangs into John's neck, but when he tastes the blood, he recoils in disgust. John had forgotten what the vampire could not have known: John Constantine has demon's blood. John laughs gleefully, watching the vampire suffer from the demon's poison. As he convulses on the ground, John takes the opportunity to drunkenly piss on his head. The sun begins to rise, and the vampire crawls weakly for the shadows, but John drags him back out. With a spiteful kind of joy, John watches the Vampire King explode in flames, and drinks down the gin he took from Davy to the last drop. It is a wonderful feeling.

After passing out nearby, John wakes to hear the police discovering Davy's body. They express disgust at his having been a male prostitute, and John becomes angry. When he berates them, they knock him about, and treat him with similar disgust. Later, he returns to his old neighbourhood and purchases some cheap liquor. The tobacconist recognizes him, for his attachment to silk cut cigarettes, but he claims to be someone else. He returns to the street to wallow in his sadness and bury his memories with alcohol.

Retrieved from "https://heykidscomics.fandom.com/wiki/Hellblazer_Vol_1_69?oldid=1433575"
Community content is available under CC-BY-SA unless otherwise noted.