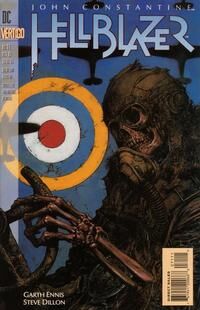 You never gave up. You knew the precious thing you had, and you scraped and clawed and fought to the last drop of blood for life-- And I think I owe you something, mate.

Still drunk and homeless, John Constantine stumbles around the banks of the Thames, singing an old song that Kit Ryan once taught him, though he is too drunk and too determined than to let himself remember that it was she. After a particularly violent upchucking, John discovers that he vomited blood, and collapses in some nearby grass, oblivious to the skeletal remains nearby. He thinks on something his late friend Davy had said; that once you get low, at least you know you can't go any lower. He scoffs to himself, knowing that there's always once place lower that you can go.

The skeleton is that of Jamie Kilmartin, a pilot of the second world war, who was hit while flying over England. He had circled high over London, coming dangerously close to crashing several times. He became convinced he would die at eighteen, with only two kills to his credit - and still a virgin. Even still, he remembered his last encounter with his squadron leader Grant. The older man had overheard him refer to death as an inevitability, and became very angry. He had made the boy swear never to give in to death; to fight it to the last bloody drop. Otherwise, why did he even bother to live in the first place? With that message in mind, Jamie had struggled to keep his plane in the air til the very end, eventually crashing to the ground on the banks of the Thames.

John wakes, with memories of the dream he just had fresh in his mind. He turns his head and screams in horror at the skull next to his face. Scrabbling away, John catches his breath, and looks on the remains with more calm. He looks around, and discovers the remains of the crashed plane nearby. Something about it inspires him.

John returns to London, and uses his abilities to influence a rich man to give him enough money to get started, getting a room, and finally shaving off his scraggly beard. Once he has cleaned himself up, he returns to the crash site and digs a grave for the body. He recalls how he had always thought he had his life worked out, right down to how to die. And then all of a sudden, he had been in the wreckage of Jamie's plane, and he knew that he was wrong. He couldn't simply pull the black blanket of death up around his shoulders and give up. He would fight death; fight it to the last bloody drop. While there is always somewhere lower he could go - if he ever did go that low, why bother in the first place?

Retrieved from "https://heykidscomics.fandom.com/wiki/Hellblazer_Vol_1_71?oldid=1433577"
Community content is available under CC-BY-SA unless otherwise noted.