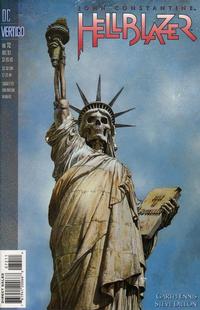 John Constantine has managed to catch the last seat on the early flight to New York. Unfortunately, that seat is beside a very talkative man, who annoys him deeply. In order to distract himself, he reads through the in-flight magazine, and discovers an ad condemning magic users. Amused, he takes out his pen and writes a letter to the given address in the guise of Nigel Archer, ordering an information package in his name.

The annoying man gets up to use the washroom, and John warns him against it, telling the story of how a man he once heard about, whose innards were sucked out by the toilet. After that tale, the man refrains from speaking anymore.

In Manhattan, John stops by an Irish pub, where the bartender recognizes him, despite his not having been there in nearly ten years, when Brendan Finn was still around. John enjoys a pint, and looks on that time fondly.

Elsewhere, a man named Zeerke reports back to Papa Midnite that John has returned to the city, and claims with some glee that John has changed since last he was there. John didn't recognize him as the man who had been involved in Ben Cox's death, nor did he recognize him when he walked right up to him and asked for a light. Apparently whatever spark John used to have, he has lost. Happily, Midnite uses his sister's skull to see for himself that John has changed. Now is the perfect time to get revenge.

John uses his magic to influence the receptionist at his hotel into giving him his room for free, and then reflects on how he threw out the last year of his life, once Kit Ryan left him. It's time to get a move-on and be sure to stay a step ahead of the devil, as best he can.

John returns to the pub, where he has a pint, but it has been spiked with some kind of hallucinatory by Papa Midnite, and John begin to see morbid things. He rushes from the pub in horror. He comes to in a dark room, where a man claims that it is Ellis Island. He demands John's name, and nationality, his criminal record, his destination. John gives all of these, except his destination. The man warns in a sinister voice that John will soon find out his destination, and releases him into a confusingly warped version of the city.

Retrieved from "https://heykidscomics.fandom.com/wiki/Hellblazer_Vol_1_72?oldid=1433578"
Community content is available under CC-BY-SA unless otherwise noted.