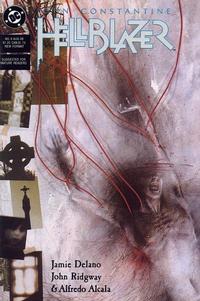 Disaster's snapping at my heels and it's time that I was somewhere far away. It's all up to me again, ennit? Somehow, I've got to stay ahead and get some news aces up my sleeve. But right now, all I really need's a smoke.

Since coming to the Resurrection Crusade's castle in Glastonbury, Zed has been mentally manipulated and re-educated until she is no longer sure that her time with John Constantine ever happened. They have renamed her Mary, and they intend her to be key to their plan to call God to them. They complete their mental indoctrination of her, leaving only surgical alterations to do.

John is tortured by memories of his time in Ravenscar Secure Hospital being taunted and tested by Doctor Roger Huntoon. John had tried to explain that what happened at Newcastle wasn't his fault, but Huntoon was unconvinced, and he had administered shock treatment. Finally, John wakes in the hospital. His body is in poor condition, having broken many of his bones after leaping out of a moving train. Finally recalling how he got to be there, and how the Swamp Thing had saved his life, John feels embarrassment.

Gauging the extent of his injuries, John realizes that he is not in good shape at all. Looking over, he sees that there is a police officer posted outside his door, and decides to pretend to be unconscious when the doctor approaches. He fails to notice that the policeman is dead. Keeping his eyes closed, John is forced to cough at the stink of something strange in the room. He tries to remain still as he feels something wet touching his face. When the thing touches his lips and forces its way into his mouth, John opens his eyes and is horrified to see that he has been probed by the demon Nergal's tongue.

Nergal introduces himself as the one behind the Damnation Army, and his invitation to join them is still open. Naturally, John refuses, but Nergal responds that there is no choice in the matter. His cooperation is requested, but not required. John laughs that there isn't much the demon can do to him to coerce him, given that his arms and legs are already broken. Nergal suggests that John might have wanted to join him out of revenge for the death of Ray Monde at the Resurrection Crusaders' hands. Meanwhile, they have also taken back Zed. Even still, John refuses to join Nergal's army. So, the demon comments that he may be unable to restrain himself from feasting on the innocent souls of the children in the maternity ward if John doesn't cooperate. Finally, John agrees to listen.

Nergal admits that times are changing . An era is passing. Good and evil had always battled in a cyclical fashion, with neither ever really gaining ground against the other. John had been involved in the events which led to great changes in Hell, when the Brujeria called on the Great Darkness and caused civil war between demons. The Resurrection Crusaders are the net that Heaven has cast to catch souls and place them on God's table. The Tongues of Fire are their gutting knife.

Nergal explains that there has been a prophecy: a child will be born between nature and super-nature. Like in the past, at the winter solstice, a god will be born of a woman, and in this case he believes that that woman will be Zed. John interfered in Nergal's plans to kill her, and the demon thinks that John should now use his relationship with Zed to break the prophecy, otherwise, he will start eating babies out of spite. John agrees, but with some terms: he must have time to take care of business, and he must be healed. Nergal agrees, filling John's IV with his own blood and warning that fast remedies are extreme. The demon's blood burns in John's body, but it does it's work, and he is healed. The demon states that when the deed is done, they will meet again.

With the demon's blood flowing in his veins, John heads back to London, and a discount travel agency with intent to go to the United States of America.

Retrieved from "https://heykidscomics.fandom.com/wiki/Hellblazer_Vol_1_8?oldid=1433514"
Community content is available under CC-BY-SA unless otherwise noted.